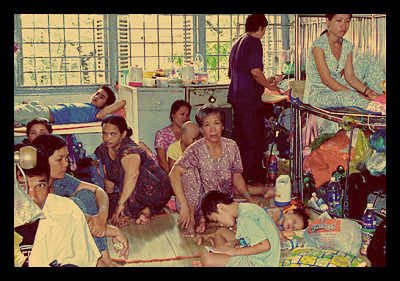 While many people know cancer is one of the leading causes of death globally, few realize cancer has become a significant burden on the developing world. The World Health Organization (WHO) reports more than 60 percent of new cancer cases occur in Africa, Asia, and Central and South America, concluding that cancer in the developing world accounts for more than 70 percent of all cancer deaths.

In 2012, there were 14.1 new cases of cancer, compared with 12.7 million new cases in 2008. Part of the reason for this is globally, the population is aging. Developing nations are seeing an increase in many cancers because people living longer and having a change in lifestyle. Many people in developing countries are adopting the lifestyles of those in industrialized nations and are now facing new risk factors such as poor diet, obesity and smoking. This is causing an increase in common cancers such as breast cancer, colon cancer and lung cancer.

Breast cancer was the most common cause of death in women in 2012. Treatments and testing for breast cancer that are available in industrialized countries have not yet reached the developing world. Cancers caused by infections such as cervical cancer (often caused by the Human Papilloma Virus [HPV]) also cause more deaths in the developing world because there are fewer screening and treatment programs for the disease.

As a result of gains by global health professionals, such as the reduction in infectious disease and the decrease in the child mortality rate, many more people in developing countries live to older ages. Unfortunately, work in chronic disease prevention and intervention needs to catch up. Developing countries do not have the resources to screen, prevent and treat chronic diseases such as cancer.

Global health has historically been focused on communicable (or infectious) diseases. Julio Frenk, Dean of the Harvard School of Public Health, says there needs to be a switch in thinking that allows for a more comprehensive view of global health. First, because communicable and non-communicable infections are not as separate as once thought. The WHO estimates that one fifth of cancers are caused by communicable infections such as HIV, HPV, hepatitis B virus, and Helicobacter pylori. In addition, infections, hunger and maternal deaths are no longer the only problems of the poor. The world’s poor people are increasingly prone to non-communicable diseases and injury.

There is a misconception that because there are “bigger fish to fry,” such as infectious diseases and poverty, people should not worry about cancer. However, in many middle-income countries, cancer is now one of the leading causes of death and yet it still receives little attention. There is also the issue of having access to screening be inequitable. In middle-income countries, only the most affluent people have access to cancer screening.

Fortunately, information is beginning to be spread about the need to add cancer to the global public health agenda. Bill and Melinda Gates gave a $50 million grant to create the Alliance for Cervical Cancer Prevention.

According to the World Health Organization, Cancer cases are soaring each year. Data indicates an upward trend from 12.7 million cases in 2008 to 14 million in 2012. Cancer related deaths have also increased from 7.6 million to 8.3 million since 2008. With these growing rates, there is a desperate need for advances in diagnosis and detection of cancer.

An IARC report has shown a connection between increased smoking, obesity and cancer rates. This report also predicts a rise in cancer cases to 19.3 million by 2025. Several types of cancer kill every year but the most common cancer affecting thousands of women worldwide and is a leading cause of deaths in developing countries is attributed to breast cancer.

Developed countries do not have the clinical advances required to stop the disease at an early stage. Several people living below the poverty level don’t even know they have breast cancer since clinics are scarce. The Word Health Organization has also claimed this urgency for treatment of breast cancer in developing countries as thousands die from late detection. In 2012, around 522,000 women from around the globe died of this disease. Lung cancer is also among the top most common cancers worldwide, about 13% of total cancer cases. The large amount of lung cancer rates has been linked to both increased smoking from adults and young adults alike. Longer lifespans also contributes to these spiking rates according to the BBC.

Several health leaders from IARC believe that these growing cancer rates can be changed through preemptive action seen before with cervical cancer and access to the HPV vaccination. They hope that national programs for screening can produce similar excellent results and by giving easy access to treatment or detection centers, several will be able to beat other forms of cancer. 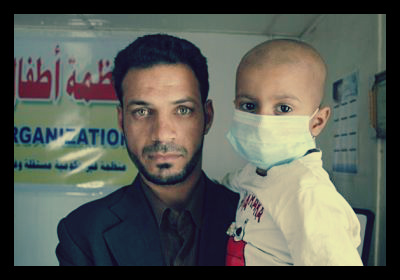 The war in Iraq is finally over – new leadership is in place and the country has begun to rebuild. But the effects of the Iraq War continue to have a deadly impact. Contamination from depleted uranium used in U.S. munitions has resulted in an increase of cancer and birth complications throughout the region.

There has been a startlingly rise in premature births, infertility and congenital birth defects. Doctors report children born with tumors, deformities, multiple limbs and underdeveloped nervous systems.  Mothers sometimes do not survive through the delivery process due to unexpected complications.  Most babies born with these extreme abnormalities do not survive. Dr. Alani, who has been studying the effects of radiation in Iraq, reports that 14.7 percent of all babies born in Fallujah have birth defects.  In post-atomic bomb Hiroshima and Nagasaki, the birth defect rate was about 2 percent.

Exposure to lead and mercury during the 1991 bombings and the 2003 invasion have also led to increased cancer rates.  Busby reports that childhood cancer in Fallujah, Iraq is 12 times higher since the heavy bombing started around 2004.  Basra University reports that leukemia in children has increased by 22 percent, and the number of patients with breast cancer has increased 19 percent since the 2004 invasion.  Cancer is now the leading cause of death in southern Iraq, according to a report published by the Basra University Medical College.

So far, the United States has refused to acknowledge the damage caused by its chemical weapons. No compensation or assistance has been provided for Iraq, similar to refusals to clean up Agent Orange after the Vietnam War.

The medical impact of war will not go away any time soon.  When depleted uranium bombs explode, they produce a fine dust containing uranium.  The uranium is absorbed by plants, contaminating the food and water supply. To make matters worse, Iraq’s infamous sandstorms can also  stir up the uranium, making the contaminants airborne. It will be 4,000 years before the depleted uranium will decay to a safe level.

AIDS and cancer have become some of the most widely known fatal diseases. Now, these two diseases have been linked – Kaposi sarcoma cancer has been known to cause HIV/AIDS. However, Cornell University engineers have created a new smartphone-based system, which might help detect HIV, and Kaposi sarcoma, a cancer linked to HIV/AIDS.

The smartphone-based system consists of a “plug-in optical accessory and disposable microfluidic chips, for in-the-field detection of the herpes virus that causes Kaposi Sarcoma.” David Erickson, engineer and creator of the system says that “the accessory provides an ultraportable way to determine whether or not viral DNA is present in a sample.” Erickson and his working partner, a biomedical engineer, Matthew Mancuso, have also explained that the smartphone app can also detect other maladies and health conditions including: E. Coli, Hepatitis, malaria, and other infections.

According to Mancuso, “the system is not chemically based and does not use the phone’s built in camera.” Instead, the system uses gold nanoparticles to diagnose these diseases. According to Science Daily, “gold nanoparticles are combined with short DNA snippets that bind to Kaposi’s DNA sequence,” then the particles and the Kaposi sequence are combined and added onto a microfluidic chip. If DNA is present, then particles which affect the light transmission of the solution clump together. This quickly causes a color change and allows scientists to identify if you have the disease: if the solution turns bright red, there is little to no amount of Kaposi sarcoma in your DNA, and if it turns purple, then patients are diagnosed with the disease.

For many, this is a wonderful scientific advancement. It allows users to diagnose the condition with little training.  According to Erickson, “Expert knowledge is required for almost every other means of detecting Kaposi Sarcoma,” Mancuso says. “This system doesn’t require that level of expertise.” Erickson and Mancuso are now collaborating with experts at New York City’s Weill Cornell Medical College. They plan to create a portable system for collecting, testing, and diagnosing samples that could be available for use in the developing world by next year. They also hope to broaden their scope of diagnosis to other diseases and to introduce their product to developing nations by 2015. 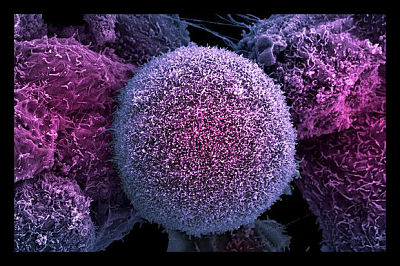 Many people in developing countries are lucky to have dinner tonight. While alleviating hunger is a main goal for many humanitarian organizations, the types of food that impoverished people have access to is becoming a concern for health experts. Cancer is an illness affecting people all over the world and developing countries are no exception. However, those living in the third world are especially at risk due to malnutrition, food insecurity, and lack of education.

Cancer is one of the most common causes of death in developing countries and affects more people than in the developed world. One of the main reasons for this is diet. Fruit, vegetables, whole grains and fish are all part of a healthy diet that helps to prevent cancer. On the other hand, fats and oils can increase a person’s chance of developing cancer. This becomes a complicated issue when there are no fresh foods in a community due to conflict or natural disaster, but a humanitarian organization sends processed foods. Rather than starve, the population will eat the unhealthy food.

Several other ways that people living in the third world are more at risk for cancer include exercise habits, smoking, alcohol consumption, sex at an early age and sex with multiple partners. Tobacco can lead to lung, mouth and neck cancer, and early and multiple partner sex is linked to cervix cancer as well as sexually transmitted diseases.

Another main contributor to high cancer rates in the developing world is the healthcare system. Cancer screening services and prevention treatments are out of reach for many impoverished people due to cost, location of healthcare facilities, and limited availability. A lack of vaccines is also a huge concern in the developing world. Vaccines like HPV and HBV are simply not available to a large portion of the population.

There are simple ways to decrease the rates of cancer in the developing world. These include improved food and agriculture aid, increased funding for healthcare, and more vaccines available at a low cost. While these solutions are simple, the implementation of these methods can often be complicated. It can be difficult to reach those living in rural communities and healthy food is difficult to transport long distances. However, increased foreign aid funding, agriculture program aid, and cancer education would be solid first steps towards cancer prevention.