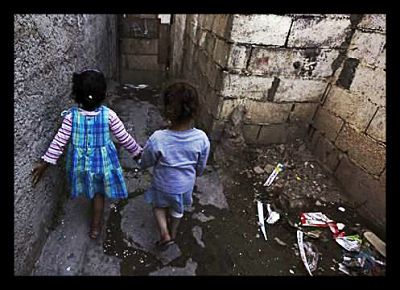 Algeria, a French-speaking country in the north of America, enjoyed relative prosperity until around the 1980s. After independence, the economy was buoyed by booming oil prices. However, a blow to the oil market and inept management saw conditions in the country decline after the 1980s, and Algeria’s poverty has continued to rise since.

Today, nearly a quarter of Algerians are living close to or below the poverty line. The majority live in rural areas, though the urban centres are also suffering from unemployment rates, the most affected being unskilled youth.

Algeria suffers from major inequality in the distribution of wealth. A select minority control a large amount of the resources and live in relative affluence, able to enjoy modern conveniences, private school educations, and trips abroad. Yet the majority of the population lives in squalor and struggles for access to healthcare, clean water, education, and food.

The poorest in Algeria are the landless farmers who live in the mountainous regions to the north or near the south Saharan region. Working on the production of crops, and unable to procure their own land, they have been particularly affected by soil erosion and degradation, droughts, poor irrigation, and drainage.

Algeria’s problems are not unsolvable and could be improved by improvements in agricultural practices or providing support services or education. Yet internal conflicts have worsened the problem in recent years, and a lack of political stability has prevented governments from implementing the necessary long term structural reforms that are needed to provide resources to lift the nation out of poverty.