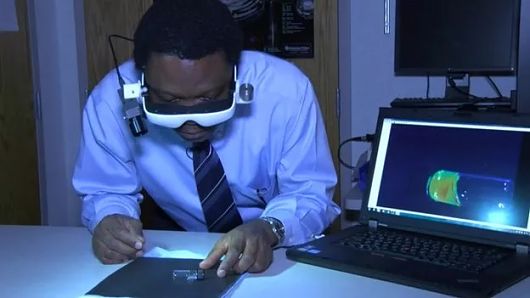 This award is given to a recipient who has made outstanding contributions to the profession of chemistry and has demonstrated potential to further the profession.

Dr. Achilefu, a professor of radiology and biomedical engineering, and his team developed glasses that contain imaging technology. The glasses are intended to help surgeons view cancer cells while operating, instead of operating “in the dark.”

The project began in 2012 when Dr. Achilefu and his team received a $2.8 million grant from the National Institutes of Health. Before the grant, the team received limited funding from the Department of Defense’s Breast Cancer Research Program.

The glasses were in the development stage for years, testing the technology on mice, rats and rabbits to confirm the effectiveness of the glasses.

In order to see the infected cells, two steps must be followed.

First, the surgeons must inject a small quantity of an infrared fluorescent marker into the patient’s bloodstream. The marker, also known as a tracer, contains peptides that are able to locate the cancer cells, and buries itself inside.

The tracer lasts about four hours. As it moves through the patient’s body, it will clear away from non-cancerous tissue.

This technology was first tested on humans at the Washington University School of Medicine in June 2015. Four patients with breast cancer and over two-dozen patients with melanoma or liver cancer have been operated on using the goggles.

Ryan Fields, a surgical oncologist who is collaborating with Dr. Achilefu says, “[the glasses] allow us to see the cells in real time, which is critical. Because the marker has not been FDA approved, doctors are currently using a different, somewhat inferior marker that also reacts with infrared light.”

Julie Margenthaler, a breast cancer surgeon, explains that many breast cancer patients must go back for second operations because the human eye cannot see the extent of the infected cells alone.

“Imagine what it would mean if these glasses eliminated the need for follow-up surgery and the associated pain, inconvenience, and anxiety”.

The Food and Drug Administration are still reviewing the cancer seeing glasses and the tracer developed by Dr. Achilefu and his co-researchers. But, if the glasses are approved, the removal of cancerous cells has been changed forever. And most importantly, patients will receive the care in order to treat their cancer.