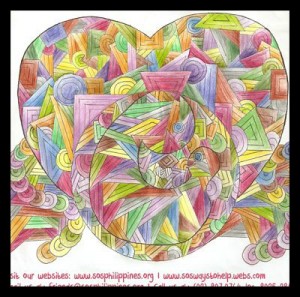 Artwork From SOS Children’s Villages in the Philippines

In August 2011, the children and staff of the SOS Children’s Village in Mogadishu, Somalia were forced to evacuate a fourth time as war disrupted the area. They were not able to return until December 2012. Ahmed Mohamed, director of the SOS Children’s Village in Somalia, acknowledges that experiencing 20 years of armed conflict and an unstable government is detrimental to a majority of the Somali population and that SOS brings hope to children and families. In a class exercise in the village, children were asked to write letters abroad to illustrate what life is like in Somalia. Ali, a student, wrote that the conditions became safer and less worrisome in Mogadishu after the effects of SOS Children’s Village.

SOS Children’s Villages, inspired by friends and sponsors, has set a target to double the capacity to provide assistance to children by 2016. Siddhartha Kaul, the organization’s newly elected president, calls for increased sponsorship to help reach this goal of providing permanent caring family environments for one million children. Kaul speaks of faith and hope in attaining their 2016 goal, reflecting that, “for 63 years, supporters have responded to our work with tremendous faith and we seek their continued help.”