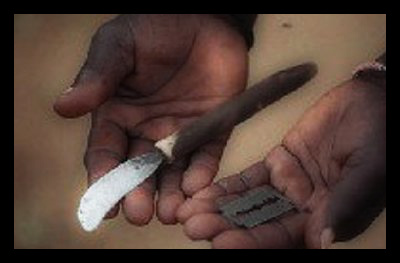 Female Genital Mutilation (FGM) ruins countless lives every day. FGM is a humiliating torturous cutting of the female genitalia carried out by various groups of the community, including health practitioners, elderly people and female relatives. According to the World Health Organization (WHO,) four types of FGM procedures exist:

The partial or complete removal of the clitoris.

Involves removal or partial removal of clitoris, as well as labia.

Narrowing of the vaginal opening.

This includes other forms of FGM not classified above, such as, burning, piercing or scraping. Any one of these types of FGMs is carried out on a female at any time in her life.

Millions of cases of FGM are reported each year. According to the WHO, over 100 million women and girls have had their human rights violated.

FGM is considered a human rights violation because it inflicts unnecessary pain and harm to unwilling women and girls. Laws against FGM practices have been created in 18 African countries. If caught sentences from three months up to life in prison are given.

There are also 12 industrialized nations that have passed laws criminalizing FGM.

An 8-year-old girl from Djibouti died from the effects of FGM. She was held down by friends and neighbors while a “practitioner” subjected her to FGM. Her clitoris, labia minora and labia majora, all external genitalia, was cut away causing uncontrollable bleeding.

After the procedure was done the girl’s legs were tied shut to promote “healing” and she was refused water because the need to pass urine was thought to introduce bacteria to the wounds. The young helpless girl continued to bleed throughout the evening and sob uncontrollably due to pain.

Eventually the girl was taken to the hospital and given a blood transfusion. Sadly, it was too late to save her life.

FGM has been reported in 28 African countries and various Asian countries.

According to data from the WHO, seven countries: Djibouti, Egypt, Eritrea, Guinea, Mali, Somalia and Sudan have a FGM prevalence rate affecting 85 percent or more women. Other African countries have only slightly lower prevalence rates; a large portion of the African continent has not received FGM rates.

FGM is most likely performed in lower class poverty-stricken communities. This is due in part to the fact women and girls do not know FGM is against the law. Most believe that it is there duty as a woman to have FGM performed and if they refuse, they will be harshly criticized and shamed. These are the ones who are not held down and forced against their will.

Several campaigns to eradicate FGM from the world are underway. One government organization, the United Nations, has been tackling it as one of the world’s Millennium Development Goals. Also, Women against Female Genital Mutilation leads campaigns to increase awareness of FGM laws and harmful health and psychological effects of FGM on females.

The continuation of advocacy for women and girls suffering from Female Genital Mutilation needs to last until FGM prevalence is zero. People should continue to call their congressmen, write their legislature, and advocate for worlds helpless.

Hopefully, through the increased awareness, global campaigns, and laws FGM will become a thing of the past and no female will have to endure torturous inhumane pain ever again.