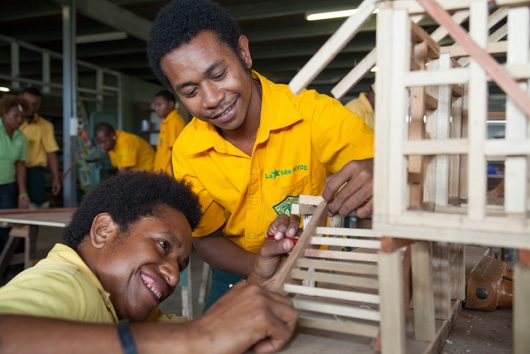 Papua New Guinea is a country rich in mineral, agricultural, forestry and fishery resources. The country suffers from weak governance, corruption, limited capacity to deliver basic services, a deterioration of its health system and a concentrated HIV/AIDS epidemic among key populations.

With the help of U.S. bilateral and multilateral assistance, Papua New Guinea has experienced recent economic progress based around its abundant energy, agricultural and mineral resources. As a result, the U.S. benefits from foreign aid to Papua New Guinea as well.

Providing the opportunity for stability in impoverished countries strengthens their stability and benefits the U.S. through contributing to trade and foreign relations.

The major U.S. exports to Papua New Guinea are petroleum and mining machinery and aircraft. Imports to the U.S. from Papua New Guinea include gold, copper ore, cocoa, coffee and other agricultural products.

Additionally, through the U.S.-Pacific Islands Multilateral Tuna Fisheries Treaty, Papua New Guinea is able to access U.S. fishing vessels in exchange for a license fee from the U.S. industry.

The U.S. benefits from foreign aid to Papua New Guinea through foreign relations. The United States and Papua New Guinea meet through a mutual membership in the Asia Pacific Economic Cooperation (APEC). APEC facilitates trade and investment, economic growth and regional cooperation. It serves as the leading forum in the Asia Pacific community and focuses on developing and strengthening the multilateral trading system, increasing the interdependence of member economies and promoting sustainable economic growth in the region.

APEC’s work is non-binding, meaning that decisions are made based on consensus and commitments are taken voluntarily. APEC has contributed to the reduction of barriers to trade, such as tariffs, which has led to the expansion of economic growth and international trade in the region.

In addition to APEC, the United States and Papua New Guinea have a history of close partnership. The two countries work together to combat issues such as improving transparency and good governance, fighting human trafficking, restraining the effects of climate change, protecting fisheries, improving public health and promoting gender equality. The militaries of both the U.S. and Papua New Guinea have a cooperative security assistance relationship that focuses on joint humanitarian exercises and the training of Papua New Guinean military personnel.

Papua New Guinea and the U.S. belong to several of the same international organizations, including the United Nations, the International Monetary Fund, the World Bank, the World Trade Organization, the ASEAN Regional Forum, the Pacific Community and the Secretariat of the Pacific Regional Environment Program.

The U.S. aims to improve countries around the world by supporting them with foreign aid. Countries such as Papua New Guinea have shown that the money provided to them has strengthened their economic conditions, and in turn, the U.S. benefits from foreign aid to Papua New Guinea through trade and foreign relations.