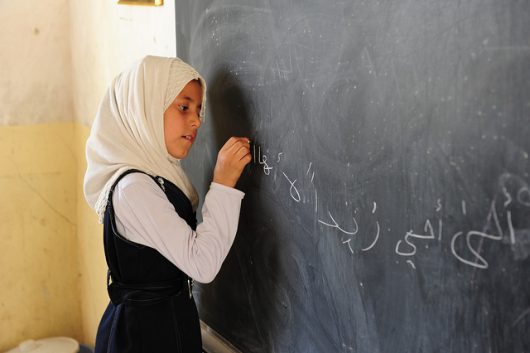 In poorer developing nations, 75 percent of children cannot read a single word of their native language. Illiteracy in developing nations stems from a lack of quality education, which can lead to familial economic instability, gender inequality and child mortality.

The Benefits of Addressing Illiteracy in Developing Nations

Addressing illiteracy in developing nations and increasing access to education can positively influence countries in many ways:

Pencils of Promise is a nonprofit organization whose focus is addressing illiteracy in the developing nations of Laos, Guatemala and Ghana. It achieves this goal by building schools, supporting local teachers and implementing health and hygiene programs to increase educational outcomes.

The organization started in 2008 with an initial deposit of $25, has since built 471 schools, supported 921 teachers and impacted 90,164 students as of June 2018. Varying educational indicators reveal rapid improvement as children ascend through grade school within the Pencils of Promise facilities.

By fifth and sixth grade, 54 percent of students are proficient in reading comprehension, which is used to assess independent readers. The data also shows amazing teacher commitment, at a rate of 87 percent compared with a global average of 70 percent.

Health is a huge factor in a child’s survival. Annually, clean drinking water could prevent the deaths of 860,000 children. Through Pencils of Promise’s WASH program, 97 percent of students in schools where the program has been implemented report clean drinking water.

The organization maintains close ties with the communities in which it works. Local community members contribute 20 percent of the resources and labor to every school built, and all of its country directors are from the country they are working in.

Pencils of Promise Partners with Companies to Broaden Its Impact

Pencils of Promise uses a for-profit business mentality to form lucrative partnerships with corporations such as Google, Dolce & Gabbana and Vogue. All administrative expenses are covered by corporate donations. All individual donations made online go solely to funding program services.

In the fall of 2017, Pencils of Promise partnered with the sweatshop-free clothing manufacturer American Apparel to create a capsule collection of t-shirts and hoodies emblazoned with the eye-catching phrase “Two hundred fifty million kids can’t read this”. The collection represents American Apparel’s commitment of $200,000 to fund the building of three schools in Guatemala, Laos and Ghana.

The mantra of Pencils of Promise is that everyone has promise. Addressing illiteracy in developing nations can provide millions of children with pathways out of poverty. Everyone gains from the progress that knowledge fosters.

Two hundred and fifty million kids can’t read this; where could we be if they could?