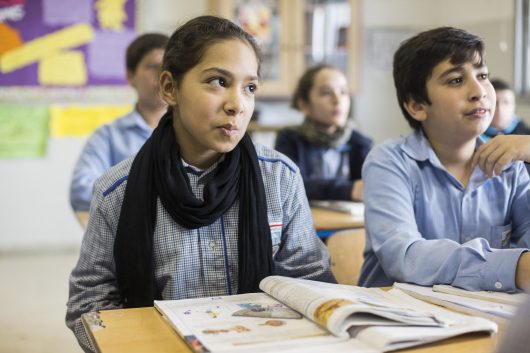 When the Arab Spring began in 2011, the Middle East’s future became unclear. Since its advent, nearly 300,000 people have been killed and 11 million have been displaced externally. Syrian refugees have taken refuge in Lebanon, Jordan, Iraq, Turkey, Greece and Germany.

Even though the countries have granted them asylum, many young children do not attend school. Of the 11 million displaced Syrians, nearly 2.5 million are school-aged children. Attending school is a difficult task for these children. As an overarching issue, the education system cannot sustain the thousands of Syrian refugee children entering their classrooms.

Since 2012, the Jordanian Government, Ministry of Education and Higher Education have either covered Syrian children’s fee or waived them. Even if the children can afford to go to school, parents do not think it’s safe for their children to be journeying a long way. To overcome these barriers, War Child Holland in Lebanon created a walking bus. Instead of children walking alone to school, they walk together in one large group.  In Jordan, UNICEF provides buses to take children to school.

To accommodate those who are not attending school or who have dropped out, the Lebanese NGO Iqra runs Classroom in a Bus whereby students and teachers are trained and taught in the town. In Turkey, students now do not have to show any identification, they can enroll for free and are taught in a Syrian Arabic curriculum. These adjustments coupled with the collaboration between Turkey and UNICEF to build seven new schools is a contributing factor to the 30% increase in enrollment. As a global initiative, donors and host countries have pledged, as the Human Rights Watch states, “more than $11 billion in multi-year support to meet goals including universal school enrollment in refugee-hosting countries by 2017.”

Through donations, global workings and Human Rights Watch projects, there are expansions, “to address other barriers.” Some of these include issues of documentation, NGO roles, addressing dropouts and reducing child labor. The NGO, government and global initiative contribute to UNICEF’s strategy, No Lost Generation, which ensures all Syrian refugees are provided with adequate educational opportunities.

The Syrian Crisis is one of the worst humanitarian crises. Yet, there is an admirable level of determination to help Syrian refugees adapt and provide them with equal opportunities.