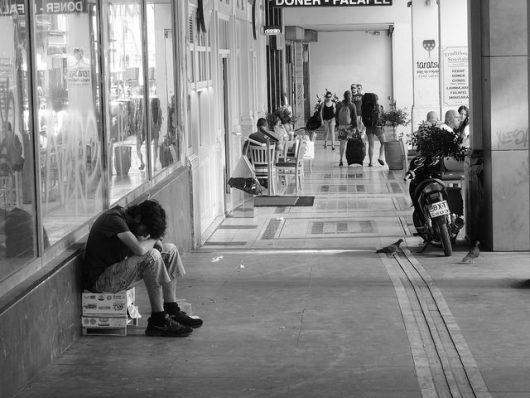 For the past few years, Greece has required heavy subsidies from the International Monetary Fund (IMF) in conjunction with the European Union (EU) to avoid collapse. However, despite these heavy subsidies, the Greek economy continues to contract, and poverty in Greece is maintaining concerning rates.

The New York Times has compared this crisis to the infamous Great Depression in the United States during the 1930s. When these two timelines of GDP decline are placed in conjunction with the economic descents of the two countries follow the same trajectory.

The single difference between these two scenarios is that after four years the U.S. economy began to progress upward again. Inversely, the Greek economy has maintained constant economic contraction, averaging a negative growth of 25 percent GDP for the last four years.

Since the beginning of the crisis, the IMF and neighboring nations of the EU have poured over €260 billion into the flailing economy and have pledged an additional 86 billion euro to mitigate the extreme poverty that is spreading throughout the country. But even with these efforts, the Greek economy continues to shrink.

The effects of the steadily contracting economy have resulted in over a quarter of the population being unemployed, over 30 percent of the population living below the national poverty line and nearly one-fifth of the adult population not being able to feed their children. Charity organizations are running at full throttle, and some have worried at times if there will be enough food to go around.

The North American economist, Daniel Altman, has observed the fiscal problems that are being faced by Greece and has proposed several unpopular but effective ways in which the economy and reduction of poverty in Greece could make a rebound. He affirms that his prescribed measures would not be easy, but they would be possible to implement.

The first action Altman recommends is to default officially. The trade from Greece has been resulting in very low ingression of profit, and the government debt is continuing to accumulate in the background. Though defaulting on their debt would mean years of frozen access to global markets, it would also stop the progressing debt in the long run.

Secondly, the euro should be eradicated from the Greek economy. As it stands, the government cannot use inflation to its advantage since the euro is a transnational currency. A return to the Greek drachma could necessitate the aforementioned default and an initial scare would be probable, but in the long term, a return to domestic currency would set Greece in a position for economic progression.

In addition to these suggestions are the procedures for tax elevation and a decrease in the public budget. Altman affirms that these are never popular choices, but they are necessary for recovery. Many of these actions are already being imposed as necessary conditions for the reception of bailout funds from the IMF and the EU.

Additionally, an innovative way in which Greece could reduce public debt and put its economy back on track would be through liquidation of land assets. Greece has thousands of islands and large portions of ethnically Turkish, Albanian or Macedonian lands that could be sold.

Altman affirms that neighboring countries would pay large amounts to acquire lands that are largely inhabited by their people, thus alleviating poverty in Greece and putting a dent into the national debt.

Regardless of how this issue is approached, it seems that poverty in Greece is not going to be reduced without any sacrifices.