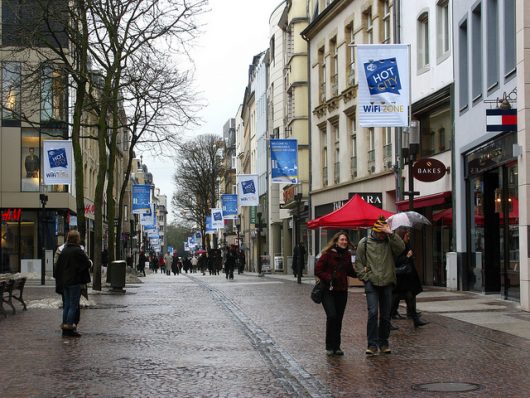 Luxembourg boasts one of the highest standards of living globally, with the world’s highest per capita income of $46,591 per person. However, with one in five citizens living under the threat of poverty and social exclusion, even one of the world’s richest countries cannot escape poverty.

In Luxembourg, most people live comfortably. Since 2009, the employment rate has increased by more than 16 percent but the current unemployment rate is only 5.9 percent – well below the European average of 10.4 percent. Generous social benefits and laws condemning discrimination against women, ethnic minorities and disabled people further improve the overall quality of life in Luxembourg.

Despite these promising conditions, poverty is still an issue in Luxembourg. In 2013, the threshold for the risk of poverty amounted to approximately €1,665. During that year, about 15.9 percent of people living in the country found themselves in that category – of this group, 23.9 percent were children.

An article written by Gornick and Jantti identified Luxembourg as a high income country with disproportionately high child poverty. In the study, they found that children in Luxembourg were 20 percent more likely to be poor than the overall population.

The Luxembourg Chamber of Employees identified another one of the causes of poverty in Luxembourg. They analyzed the relationship between the risk of poverty and cost of housing and found that nearly one third of tenants faced the risk of poverty. In other European countries, such as France and Germany, this risk is much lower.

One way that the Luxembourg government attempts to fight poverty and social exclusion is through the minimum guaranteed income (MGI). The MGI is given to people or households who fall below a certain threshold and its main goal is to provide sufficient means of existence and opportunities for social and professional inclusion.

Efforts such as the MGI are critical steps to improving poverty in Luxembourg. While many live comfortably and the country is prosperous in several ways, still more must be done to assist those in poverty and to lower the unnaturally high proportion of children in poverty.

Listening to AfricaHuman Rights in Samoa Improving
Scroll to top