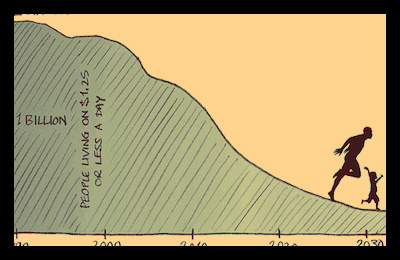 Despite the ever-pressing need to lend aid to the global community, as of recently, world poverty has been declining-presumably from a convergence of factors such as foreign aid, economic stabilization and increased development. As a result of increased investment in education, health, housing and facilitated access to water, living conditions around the globe have undergone improvement, further contributing to the decline in world poverty. According to a development report by the United Nations, the decline of poverty in the developing world was surpassing predictions.

The UN reported that “The world is witnessing an epochal ‘global re-balancing’ with higher growth in at least 40 poor countries helping lift hundreds of millions out of poverty and into a new ‘global middle class.’ Never in history have the living conditions and prospects of so many people changed so dramatically and so fast.” Furthermore, shortly after the release of the UN report, Oxford University conducted a study supporting the UN’s findings.

According to Oxford University’s poverty and human development initiative, poverty in many regions of the world is no longer as acute. According this initiative, acute poverty in the poorest countries could become eliminated within the short time frame of 20 years. Among the countries that could experience the eradication of severe poverty are Nepal, Bangladesh, Ghana, Tanzania and Bolivia.

Furthermore, the method of gauging poverty has also changed. Sabine Alkire and Maria Emma Santos of the UN engendered the Multidimensional Poverty Index (MPI) in 2010 to provide a more compressive measure of poverty. The MPI measures poverty along ten dimensions, such as nutrition, child morality, schooling, cooking fuel, water, sanitation, electricity and infrastructure. Unlike older measures of poverty that overlook critical indicators of poverty such as nutrition and health, the MPI is a far more thorough assessment.

Despite the economic crises of 2008 and 2009 that had catapulted the global economy into a recession, the world’s poorest nations are still able to rapidly approach the achievement of Millennium Development Goals. According to estimates by the World Bank, the global poverty rate is projected to fall below 15 percent by 2015, implying that other consequences of poverty such as hunger and death are also projected to decline significantly.