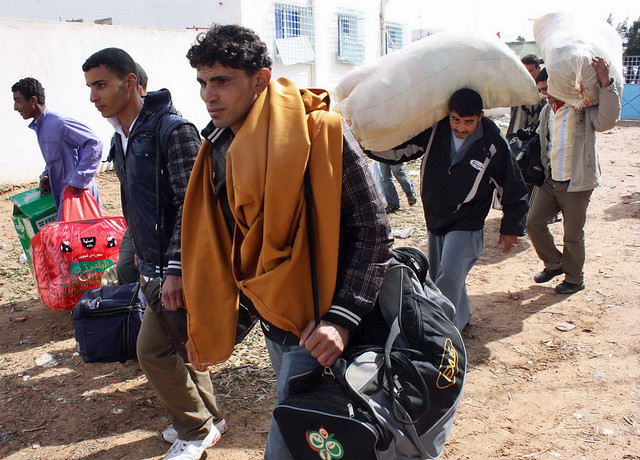 The rise in immigration and an increase in criminal activity are going hand in hand in Libya. Since immigrants are an especially vulnerable population with so many seeking asylum or other needs, criminals are more likely to target them. CNN released a report on the slave trade that is still occurring in Libya today. This report showed many people what is happening. With the influx of immigrants, it is important to see what efforts are being made in stopping the slave trade in Libya.

Libya has officially become a lawless state. The government has little to no control over what goes on, and criminals are taking advantage of this. Due to the large influx of vulnerable immigrants, the slave trade has now risen to an all-time high. Slavery has been outlawed in other countries; however, criminals don’t follow the rules. Dozen of people are still being auctioned off, some only being sold for $400. Immigrants often live in poverty and don’t what to do improve their conditions. Slave traders pick up on this vulnerability and use it to their advantage. Libya is the main transit point for immigrants that are trying to make it to Europe.

Stopping the Slave Trade in Libya

While looking at Libya and the events that are occurring there, a question arises: What efforts are being made in stopping the slave trade in Libya? The U.N. and the U.S. have been putting pressure on the government to investigate more into the crimes being committed. They urged Libya to take urgent action in these matters and to make it come to an end. So far, Libya went from not having the resources or support to track down these traffickers, to accusing and sanctioning six men. Since 150,000 immigrants cross into Libya each year, the U.N. involvement has been a huge milestone for Libya and those being sold into slavery.

Additionally, a new transit system has been put in place to make sure that immigrants are able to travel more safely. The more immigrants are provided safer ways to travel, the lesser the likelihood of being sold into slavery. At this new transit facility, run by the UNHCR, immigrants are not only being provided with safe shelter but also food, medical care and psychosocial support. UNHCR is bringing new hope for immigrants that are looking for a better life. It is a necessary facility that will bring international protection to those that are most vulnerable.

Many news outlets and people from different communities are now raising awareness on this topic. The more people to find out about what is being done in Libya, the more solutions can be found up and more actions can be taken. CNN is the original news outlet to exposed the slave trade that is happening in Libya. Afterward, more people started to take action and contribute to the conversation. By someone speaking out, it causes a ripple effect for organizations to come together and make a plan to help those being sold.

Canada is Providing a Refuge

Canada has taken action in making sure that those who were once former slaves are able to rebuild their lives. Providing the necessary housing and support can help those that fell victim to slavery to regain their life. More than 150 people who had immigrated to Canada were victims of the slavery that occurred in Libya. Canada will also be resettling another 600 people that are at risk of being sold into slavery. With the number continuously rising, Canada is doing it’s best to keep up with those that are seeking asylum and providing options for settlement.

Although the fight for stopping the slave trade in Libya is still raging on, new support systems are being brought in and making it so immigrants can feel safe. Governments, like in Canada, are now taking action, as well as organizations uniting together. The slave trade in Libya is still continuing today, but the situation in improving. By raising awareness about important topics such as this, it can act as a catalyst for other people to step in as well.

Hopefully, the immigrants and other vulnerable populations that are currently living through this tragedy can find some consolation in the fact that the world finally sees what is happening. The United Nations, the Libyan government and other organizations have dedicated their time to working towards one goal: stopping the slave trade in Libya. The measures that have been put forth thus far have already helped many people, and the next step in this journey is making sure that the rest people and immigrants of Libya are safe from slavery.