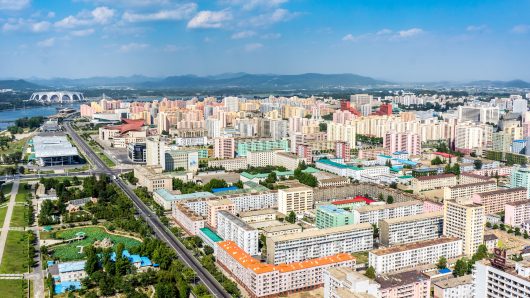 Refugees and journalists consistently cite dire living conditions in North Korea, one of the most repressive authoritarian nations in the world. Leaking information from the secretive police state, they report firsthand knowledge to outsiders. According to these sources, the North Korean government commits severe human rights abuses against its citizens, and the government can barely feed its own people.

The specter of prison is one means of keeping the population in line. North Korea’s draconian three generations rule punishes the entire immediate family if one member is convicted of a serious crime. The next two generations born in the camp are then detained there for life. Existence in the camps is extreme. Clothing and food are so scarce that prisoners survive on rats and anything else they can catch. Inmates are frequently left stunted and deformed from long hours of hard labor. Twelve-hour days, seven days a week is the normal work schedule.

Life outside of the prison camps has its own grave challenges. Living conditions in North Korea are characterized by deprivation. The elite ruling class enjoys basic benefits of modern life such as indoor plumbing, cars, meat, coffee and a few luxury items. The middle class receives sufficient food and occasional new clothes. Most people, however, struggle to survive. Half of the nation’s 24 million people live in extreme poverty. North Korea’s annual GDP per capita is $1,800, making it 197th in the world and only 2 percent of South Korea’s.

One-third of North Korean children are stunted from malnutrition. For most people, meat is an unaffordable luxury. They subsist on fermented cabbage known as kimchi, rice, corn and porridge. Most homes are heated by open fireplaces, and many have no flush toilets. Electricity, for those fortunate enough to have it, is unreliable and sporadic. Power might be available for only a few hours each day. Frequently, cell phones are used as flashlights during outages.

Theoretically, education and healthcare are free in North Korea. However, school children must provide financially for desks, chairs, building materials and heat. Patients must provide their own medications, pay for heat and cook their own meals at home.

Still, living conditions in North Korea are showing some improvement, particularly for the elite who are privileged enough to reside in the capital of Pyongyang. According to the South Korea Central Bank, the North Korean economy grew by almost 4 percent in 2016. Despite spotty service and no internet, there are now 1.5 million mobile phone users. Even in smaller cities outside of Pyongyang, electric bikes from China and Japan can be seen mingling with the country’s ubiquitous bicycles.

In Pyongyang, people are buying smartphones, tablets, hi-fi speakers and HDTVs. With the exception of accessing the internet, North Korean smartphones have similar capacities to those in other nations. In place of the internet, citizens use a state-controlled intranet. There are North Korean versions of Google, Facebook, chat rooms and online dating. Food courts in Pyongyang malls offer American-style fast food restaurants serving milkshakes and French fries. Skating rinks opened in 2013, ushering in a rollerblading craze for those wealthy enough to afford skates.

Despite difficult living conditions in North Korea, its people make the best of their circumstances. In some ways, their lives are not so different from those in democratic countries. North Koreans play video games and beach volleyball. They enjoy picnics complete with food, beer and karaoke. And of course, their teenagers take lots of selfies. Hope remains that the situation can improve so that all of its people can enjoy the living conditions that its wealthiest citizens currently do.