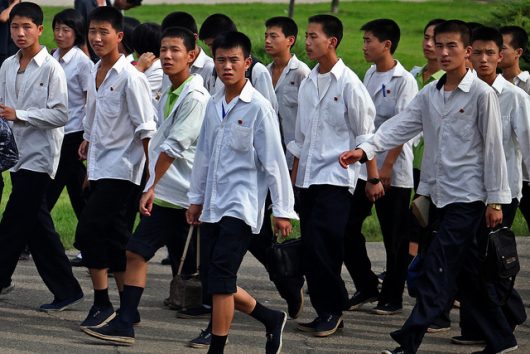 North Korea, the only country in the world which still adopts Stalinist principles, has long been one of the most impoverished countries in the world. Recently, it scored 28.6 in the 2016 Global Hunger Index, a level which the International Food Policy Research Institute classified as “serious.” A report published by the Korea Institute for National Unification (KINU) in 2013 estimated that about half of North Korea’s 24 million lives in “extreme poverty,” who are “severely restricted in access to fuel for cooking and heating.”

The two primary causes of poverty in North Korea are as follows:

Climate and geography
North Korea’s climate is less suitable for agricultural production than that of South Korea. Northern and northwestern winds that blow from Siberia cause the winters in North Korea to be bitterly cold, often involving heavy snow storms. This type of weather is particularly harsh in the mountainous regions in the north, contributing to the relative lack of arable land in North Korea. Due to the cold temperatures, single cropping is usually practiced in the north, while double cropping is possible in the south where winters are less severe.

Because of the country’s mountainous terrain, the regime has sought to increase agricultural production mainly through double cropping, rather than through expanding the cultivable area. However, due to factors such as short cropping season, prolonged and harsh winter, and uncertainty of the spring weather, the results have often been disappointing.

Despotic regime
Another one of the causes of poverty in North Korea is the despotic regime succeeded by the Kim family. During the 1980s, the North Korean regime embarked on a radical economic policy of self-sufficiency known as “juche.” This policy wreaked havoc on the country’s economy, especially after the collapse of the Soviet Union in 1991, after which the country could not import cheap fuel, its industrial base was fractured and its production of fertilizer decreased.

North Korea’s provocations on the international stage, such as the shelling of the South Korean island in 2010 and repeated nuclear tests, also resulted in numerous sanctions by the U.N., which restricted the amount of humanitarian aid going into North Korea.

These are the main causes of poverty in North Korea. Whether North Korea will be able to escape from poverty will heavily depend on the international community’s efforts, as well as the regime’s willingness to adopt open-market reforms, just as China did in the late 1970s.