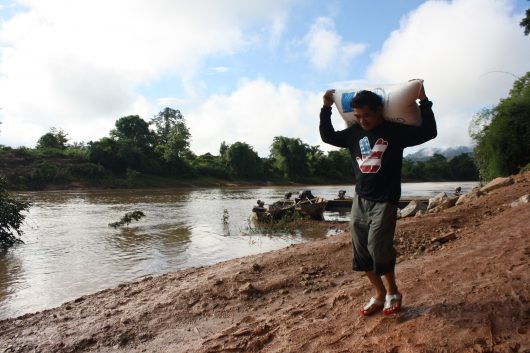 Located in Southeast Asia, Laos is regarded as the world’s most heavily bombed country, polluted with loaded ordnance. Vulnerable to extreme climate change, devastating impacts have been marked in this country in rural areas caused by flash floods, landslides, river floods and annual human and animal epidemics.

For 2016 to 2017, the total official development assistance from Australia is an estimated $44.2 million. Results from aid given in 2015 to 2016 had a tremendous impact on schools within Laos. Aid supported 217 new teacher trainees in completing their first year of teacher training, 140 being women. Scholarships were provided to 20 teacher educators and assisted 259 schools located in five provinces to acquire school lunches.

Research shows that in 2014 Laos received a total of $472.4 million in development aid. Although other countries, such as Japan and Germany, have contributed humanitarian aid to Laos, Australia has been most consistent.

Caritas Australia, a Catholic Agency for International Aid and Development, has left its mark on Laos as well. With a focus on developing women and children, Caritas is providing stability.

From 2010 to 2011, more than 40 Laotian mothers received livelihood and business training that helped pay for their children’s education. Without this opportunity, schooling funds would come from panhandling. Around 50 children living with a disability were provided education. Workshops were held to train and support caregivers, teachers and parents of children with disabilities.

Although Australia is the main donor of aid to Laos, the nation could use assistance from other countries as well. Through more aid, Laos can develop at a faster rate and create more opportunities for its citizens, leading to a better quality of life.