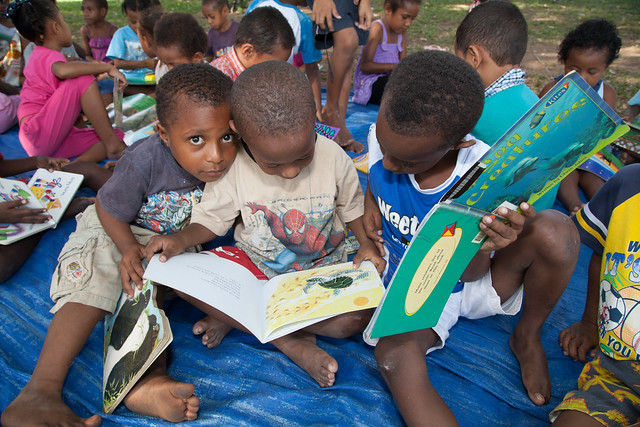 While primary school enrollment rates in Papua New Guinea are low for girls and boys, there is a significant disparity between the two. Several factors contribute to the worse girls’ education in Papua New Guinea, some of which governments and organizations are working to change.

Safety is another serious concern for girls. Gender-based violence and harassment are prevalent in schools. Just under 50 percent of girls reported feeling safe at school, with 31 percent feeling unsafe. These feelings were strongest near toilets, sports fields and school gates, with only 2 percent of girls feeling safe around toilets.

Girls are harassed by male students and teachers, thereby afraid of physical and sexual assault. The high number of male teachers contributes to low enrollment rates, with male teachers out-numbering female teachers in primary schools. While the number of female teachers doubled between 2002 and 2012, there is still a significant lack of them.

World Vision launched a project targeting girls’ education in Papua New Guinea. They established community learning centers (CLCs), which provide early childhood care for girls and boys between three and six. Education improvement classes for children under 14 are also offered. The goal is to make it easier for children to succeed in school, as well as encourage parents to take a more active role in the children’s education. Between 2014 and 2017, approximately 6000 children attended classes at CLCs and 4o00 people were involved in community awareness efforts. After attending CLCs, 90 percent of children were prepared to begin primary school, significantly higher than the baseline of 80 percent.

The National Education Plan (NEP), developed in 2015, is also aiming to improve education, with a focus on gender equality. In their most recent $7.4 million grant, their goal is to better student achievement in math and science by improving pre-service and in-service teacher education, especially for women, and increasing access to textbooks.

Due to these projects being implemented, some advancements have been made. A study by the National Research Institute found that the number of girls enrolled in school increased by almost 150 percent between 2001 and 2012. Additionally, primary school completion rates for girls rose by approximately 5 percent between 2014 and 2016.

While there is still a long way to go, Papua New Guinea has begun to decrease the differences between male and female education.

A Look at the Top 10 Worst Typhoons 1Doc3: Accessible Healthcare to Millions
Scroll to top