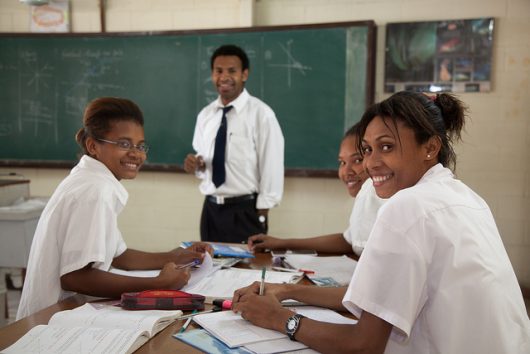 According to 2012 statistics, an estimated two million youths and adults, which accounts for about one-third of the population were out of school and unemployed. According to PNG’s education minister, an estimated 10 percent of school-aged children do not even get a chance to enroll and 50 percent of those who do drop out of school before reaching the sixth grade. The country’s net enrollment rate of 63 percent is the lowest in the Asia-Pacific region.

While PNG’s Universal Primary Education started as a British Colonial policy, access to primary schools was expanded under the Australian administration. However, the policy favored only a select few students and those selected were males. It was not until 1981, six years after independence, that PNG started its TFF policy to attract more attention. The program was met with a lot of resistance from the newly formed provinces who considered it an act of the government taking over their newly granted authority.

After four failed attempts at providing free education in Papua New Guinea, many believe that the policy is a part of the government’s political agenda to get re-elected. The policy is aimed at pleasing parents and persuading the public that the policy is the solution to easing parent’s burden in paying school fees. However, in a country, which ranks 136 out of 165 in corruption, it is not a surprise that huge amounts of funding meant for education went into the wrong hands resulting in ghost schools, ghost teachers and ghost management. Many schools are still forced to charge fees as the government fails to send its checks on time.

Hasty and, in most cases, a complete lack of implementation has been considered some of the reasons for the policy’s failure. Though government funding is mostly focused on fee elimination, it does little to eliminate the problem of classroom sizes. In many schools, students have been sent home due to lack of space. Infrastructure is another issue. Most schools have poor infrastructure with no plans in place for upgrading them to allow for more student intake.

However, all is not lost. UNICEF’s education programs are providing the much-needed support to improve education in Papua New Guinea. In collaboration with the government, UNICEF is building a case for girl’s education by reviving the Accelerating Girl’s Education Steering Committee and working with schools to promote a healthy environment for students. UNICEF is also working with the Department of Education to ensure that Early Childhood Care and Development (ECCD) is appropriately addressed. UNICEF is partnering with various government departments to develop early childhood development indicators and curricula for pre-schools and Elementary teacher training colleges, a revision of ECCD Policy and ensure engagement with civil society partners.

UNICEF is also working with the Department of Education to ensure that Early Childhood Care and Development (ECCD) is appropriately addressed. UNICEF is partnering with various government departments to develop early childhood development indicators and curricula for pre-schools and Elementary teacher training colleges, a revision of ECCD Policy and ensure engagement with civil society partners.

With Papua New Guinea currently in the midst of its election season, it is now up to the people to elect a government that will provide access and quality education of which the country is in dire need.