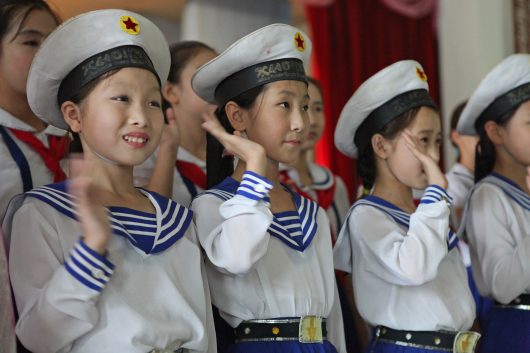 In 2015, the tale of Yeonmi Park, a North Korean defector whose story shed light the repressive and backward nature of North Korea’s government and society, took the international media by storm. However, contrary to the usual negative depiction, girls’ education in North Korea is actually more modernized and progressive than many other aspects of its society. The statement “women hold equal social status and rights with men” was promulgated in the 1972 North Korean constitution, and to a large extent, this statement is accurate in regards to girls’ education in North Korea.

Only after the opening of Korea to foreign countries in the late 19th century could more Korean females gain access to modern education, with Christian missionaries establishing girls’ schools. In North Korea, education is universal and state-operated, offering free compulsory education to the secondary level, which consists of 11 years of schooling at the minimum. North Korea’s “people’s school” (primary school) and “middle-high” (secondary school) curriculum encompasses Korean language, mathematics, literature and “socialist ethics”, which refers to political and ideological subject matter.

The reported literacy rate of North Koreans is 100 percent for both men and women over age 15. This number is self-reported by the North Korean government, making its reliability questionable, but if accurate, it makes North Korea one of the most literate countries in the world. There is no doubt that the secondary education is equally accessible to men and women.

Some Obstacles to Girls’ Education in North Korea Remain

Nonetheless, some differences do exist among the varied educational programs directed at boys and girls, and there are some restrictions on higher education for women, obstructing the potential greater progress for girls’ education in North Korea.

Traditional gender roles influence the educational system in North Korea. In this patriarchal society, this is seen in the practice of separating boys and girls into single-gender schools in both the elementary and middle school levels, preventing the two sexes from receiving a uniform educational instruction. Meanwhile, there are different curriculums for boys and girls, with more emphasis on “physical education for boys and home economics for girls”.

On top of that, at the university level of education, the limitation on girls’ education in North Korea is showcased more obviously. In contrast with the high accessibility of basic education for women and men, one of the top universities in North Korea, Pyongyang University for Science and Technology, has previously only had male students. However, recent reports have indicated increasing numbers of female students at this university.

Despite the prescribed gender roles and attendant images, there are many women majoring in medicine, biology, foreign languages and literature. These North Korean women are encouraging the breakdown of certain obstinate social norms and expectations imposed on not only women, but on men as well, that may discourage students from studying the subject of their choice.

North Korea is notoriously restrictive of its people’s freedoms, and the limits placed on girls’ education are but a mild example of the government’s repression. However, the fact that North Korean girls have the educational opportunities that they do is a heartening sign of progress, and can be of great benefit to girls and women now and in the future.