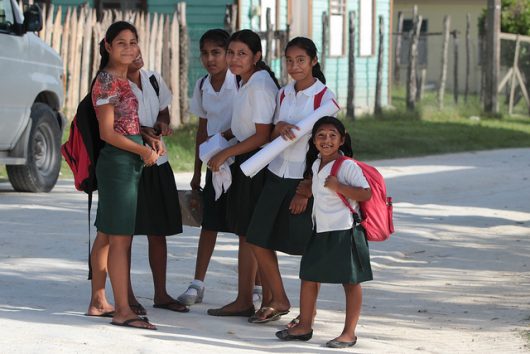 In Belize, the gender gap between men and women has been prevalent and consistent. However, in 1990, a bill was signed into law prohibiting discrimination against women based on their gender. Since then, the country has promoted women’s rights and has specifically focused on girls’ education. There are three major ways the Convention on the Elimination of All Forms of Discrimination Against Women and the Women’s Anti-Discrimination Committee has promoted a better life and has improved girls’ education in Belize.

Increased Literacy a Result of Girls’ Education in Belize

More young women are literate than ever before, leading to a more balanced workforce. Literacy, a strong indicator of equality, has increased in younger women. When literacy increases, nationwide productivity is enhanced and the reduced gender imbalance allows for a more equitable work environment between the sexes. As such, women are being given a chance to obtain degrees and higher positions in the workforce.

Not only is it statistically proven that a nation’s economy benefits from girls’ education, the social impact of girls’ education in Belize allows for cohesive collaboration for well-being in Belize. A country such as Belize that is working towards progressive goals can only benefit from closing the gender gap between those in the workforce.

While the gender gap is not wholly solved by the presence of more young girls in school, there is a significant increase in women both in post-secondary education and in the workforce. There are discrepancies in pay, but the step of promoting literacy to young girls is an important step in building a stronger Belize.

The more women there are attending schools, the more the gender-career divide disappears. Without initial education, there would not be a basis upon which to form the beginnings of a woman’s career. Historically, the church-state setup of the Belizean government has promoted that women, specifically women who do not conform to the ideal standards set by the church, should remain at home and fulfill tasks for the family rather than for the economy.

While there is no shame in a woman being at home for her family, the promotion of girls’ education in Belize is making that scenario just one option of many for women. In addition to the classic educational materials, women are now being given the option to study for previously male-dominated careers via hands-on skills in carpentry, mechanics and other areas. By addressing the traditions of separating men and women into categories of whom should perform what action in society, Belize is well on the way to developing a strong nation with a multifaceted and talented workforce.

A focus on education promotes health and independence, which are important for a developing country. Historically, there has been a connection between women with lower education levels and higher levels of domestic violence experienced by those women. In promoting gender equality in schools for girls between ages three and five, a sense of pride, autonomy and strength develops.

In providing an alternative to learning domestic tasks, the Belizean government may begin to reduce the pressing issue of domestic violence. The efforts being made in Belize show that there will likely be more progress in a country that needs both men and women to contribute to its economic growth.