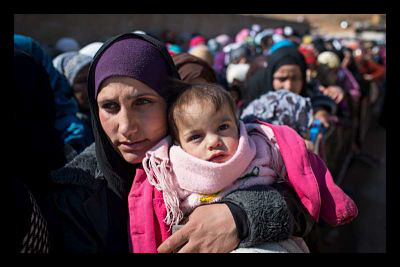 The violent blitzkriegs currently commanding Syria and Iraq are causing unfathomably grave circumstances-so many that it is impossible to convey their consequent terror and devastation. Among countless other results, is the widespread population displacement occurring throughout the region.

It is estimated that 2.8 million displaced Syrian refugees are currently residing in neighboring areas, such as northern Iraq, having been forced out of their native country due to the infamous civil war. This number significantly increases daily, as the violence continues to grow in breadth and magnitude. Over 9.3 million Syrian refugees have been displaced as a result of the conflict. Many refugees are living in camps and in host communities in the Kurdish, northern region of Iraq. In last August, alone, over 60,000 Syrian refugees arrived at these designated camps. In one record day that month, a whopping 10,000 refugees arrived. Initially, the Iraqi government accepted the refugees and accommodated their medical needs, in addition to providing shelter and work permits. However, the massive influx stretched the Iraqi accommodations, dramatically.

This is a growing humanitarian crisis that demands attention. An average of 100,000 Syrians are registering as official refugees, every month. The refugees often suffer from dehydration and diarrheal diseases as a result of scarce resources, poor nutrition, and unhygienic conditions. Among the millions are a considerable amount of children; the United Nations reported that, of the displaced, over 1.4 million are child refugees. These circumstances are inherently devastating and disorienting; for children it is particularly disrupting, as they are forced to pick up and leave, ending their educations in the process. The crowded conditions have been conducive to child outbreaks of polio and measles, threatening the children’s lives, as well as their safety and well-being.

Humanitarian group Mercy Corps has intervened on behalf of all the refugees, as well as the child refugees. They have been distributing necessary items, such as shelter materials and mattresses. They additionally built a playground for children and brought toys to an Arbat refugee camp, to ease the children’s traumatic transitions. World Vision is also helping to alleviate refugee strife; the group has been distributing personal sanitation supplies and clean water. They are providing education services for children in addition to creating Child-Friendly Spaces, which are designated areas in which children can play and unwind.

As the conflict continually unfolds in geographical conjunction with the current crises resulting from the ISIS presence, the amount of displaced refugees increases daily.