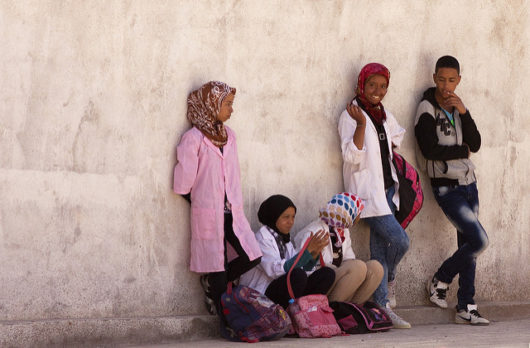 Morocco is a North African country that has seen great improvements in the education sector in recent years.

Thanks to an increase in public spending, and several programs currently in place helping to improve youth education in Morocco, the country has drastically improved the populations’ literacy rates and education system as a whole.

Morocco had the largest increase in youth literacy in the world between 2000 and 2015. The increase in this time span was 24.6 percent. The result of these efforts was the youth literacy that was vastly improved and that was at 95.1 percent in 2015.

This increase can largely be attributed to the Moroccan government’s Decade of Education. This program was established in 2000, with the goal of increasing enrollment rates and closing the gender gap in education. The program has been more than successful, closing the gender gap to 3.5 percent, and benefiting the 735,000 Moroccan youth with literacy and educational programs in 2012 alone.

The United States Educational, Scientific and Cultural Organization (UNESCO) awarded Morocco with an honorable mention in the 2012 UNESCO Confucius prize, a prize that is awarded to the nations who show great improvement in literacy rates.

Partnering of USAID and Morrocan Government

Despite the vast improvement in literacy rates, there is still work to be done in the educational sector in the country. Drop-out rates are still high, with only 53 percent of students moving on from middle to high school and less than 15 percent of first-grade students likely to graduate from high school.

The United States Agency for International Development (USAID) has partnered with the Moroccan government to improve education on a number of levels including reading, hiring more teachers and administrators and distributing reading materials.

The results of the partnership have been successful, to say the least. More than 12,000 students have been helped by the new reading method, over 340 teachers have been instructed on new reading material, an educational program to help deaf students through sign language is now offered by 10 schools across Morocco.

In 2017, a nationwide program was established to implement a phonics-based educational reading method in grades 1 and 2 in order to further develop youth education in Morocco.

Through the collaboration of the government and different nongovernmental organizations, tens of thousands of new teachers were trained every year and primary education rates rose from 53.4 percent to 98.2 percent between 2000 and 2009.

The Moroccan Minister of National Education and Vocational Training unveiled a new educational project known as Vision 2030 during the presentation of national education budget projection in 2015.

The project will put emphasis on several levels of educational improvement, including mastering the Arabic language, a working knowledge of foreign languages and integrating general education with vocational training.

Youth Education in Morocco has been steadily improving thanks to government programs and nonprofits donating time and money to help the cause. The country continues to explore future ideas to continue to improve the quality of education in the country.