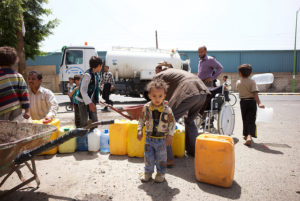 The humanitarian crisis in Yemen is cause for despair; however, the recent Yemen peace talks in Sweden and outreach programs providing humanitarian aid are offering new hope to those suffering from the conflict. Through the Yemen peace talks, the United Nations was able to negotiate a ceasefire agreement on December 18, putting at least a pause on the war until countries can reach a further agreement. This finally opens the door to providing humanitarian aid.

Opposed to War in Yemen

Despite President Trump’s wishes, the Senate ended all aid in military assistance to Saudi Arabia following the peace talks. Thanks to Senator Mike Lee of Utah and Senator Bernie Sanders of Vermont for writing the agreement, the War Powers Act was used to assert Congress’ role in military power, overriding the White House. According to the New York Times, Trump was against the end of military assistance in fear that it would cost America “billions” of dollars in arms sales, putting the fear of losing money in front of regard for human life (a reference to the Saudi Prince having allegedly killed American journalist Jamal Khashoggi).

The humanitarian crisis currently taking place in Yemen was caused by war, and the only way to stop it is to end the war and promote peace. Humanitarian organizations such as Save the Children and CARE, along with several other organizations, wrote a letter to the U.S. government to use their influence to end the war. Providing more military support will only perpetuate the problem; whereas, peace will resolve it. Lise Grande, the United Nations humanitarian coordinator for Yemen, stated that the priority must be to increase access to currency and ensure that Yemenis are able to access shipments of food.

With the ceasefire in play, the focus can be shifted to the humanitarian crisis and helping the suffering people in Yemen. About half of Yemen’s population is subject to starvation and is in dire need of aid as a result of the war. “The big countries say they are fighting each other in Yemen, but it feels to us like they are fighting the poor people,” said Mr. Hajaji to the New York Times. Hajaji is a father who has already lost one child to starvation and is afraid of losing his second, who is struggling to stay alive.

According to Save the Children’s fact sheet, about 85,000 children are estimated to have died from starvation and disease since the beginning of the war in Yemen. Despite the high numbers of people who have died or are suffering from starvation, organizations like Save the Children are making a difference and increasing the number of survivors. This organization has treated nearly 100,000 children suffering from malnutrition and is operating mobile health clinics in the hardest-to-reach areas.

People from the U.S. can help alleviate this issue in numerous ways. One such method is by contacting Senators and U.S. representatives through the United States Senate website and urge them to give aid and resources to Yemen. Since Yemen’s famine is income based, the best thing the people can do to aid is to donate money to those in need to survive. Organizations like Save the Children are also distributing cash and vouchers for food to families as well as education and safe spaces for children to keep getting an education despite the harsh circumstances and ongoing recovery from war trauma.

The International Rescue Committee (IRC) is providing outreach through healthcare, nutrition, water/sanitation services and by providing financial assistance to those struggling survive. Norwegian Refugee Council (NRC) is providing education, food security, shelter and water outreach to many Yemenis. Volunteer and/or donating to these organizations will help their work reach more people.

The resolution of the Yemen peace talks to enact a cease-fire and the U.S. halting its military assistance to Saudi Arabia serve as a positive catalyst for change in the right direction. The ongoing battle is now the aid for Yemenis in an attempt to end their critical condition of poverty. Organizations such as Save the Children, IRC, NRC and UNICEF are providing outreach and saving people’s lives, making significant progress in the work to end Yemen’s humanitarian crisis.