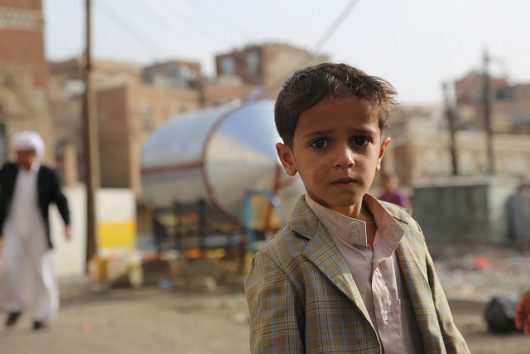 In 2015, Shi’a rebels known as Houthis allied with forces loyal to former President Ali Abdullah Saleh to rebel against elected President Abdrabbuh Mansur Hadi, leaving the country in a state of chaos. The international community scrambled to determine how to help people in Yemen. The answer comes from ending the violence, increasing medical aid, and investing in infrastructure.

The civil war has already claimed the lives of nearly 10,000 civilians and seriously damaged infrastructure in Yemen. Banks in Aden temporarily shut down following a series of robberies, and Saudi-backed airstrikes have destroyed health care and water treatment facilities throughout the country.

Yemen imports 90 percent of its food, and battles over key shipping ports in Aden and Al Hudaydah make food security a serious concerns for citizens. This has grave implications for the nearly two million acutely malnourished Yemeni children and their families. Malnourishment leaves the Yemeni more susceptible to diseases, especially cholera.

There are 370,000 cases of suspected cholera and 1,800 associated deaths. Continued fighting damages Yemeni water infrastructure, contributing to what the World Health Organization is calling the “world’s worst cholera outbreak.”

Yemen, the poorest country in the Middle East, lacks the resources necessary to alleviate poverty on its own. Fourteen million people lack access to clean water, and 30,000 health care workers haven’t been paid in nearly a year.

The situation is dire, but not hopeless. The international community is beginning to recognize how to help people in Yemen. Thanks to support from international organizations, local NGOs are providing necessary food aid. They estimate that the number of malnourished children will be reduced from two million to 385,000.

Nearly everyone who receives adequate treatment for cholera will survive, but the key is getting treatment to those who need it. The World Bank and UNICEF have partnered to help maintain local health institutions in Yemen.
UNICEF has established 1,000 diarrhea treatment centers and oral hydration corners. They have also repaired water systems in rebel-held Taiz, giving 400,000 people access to clean water.

The threat of violence, however, still looms over Yemen. President Trump has recently brokered a deal to sell $110 billion in weapons to Saudi Arabia, some of which will most likely be used in Yemen. Currently, U.S. aid to Yemen totals only $526 million, which has not been enough to end the violence.

Foreign aid is making a significant positive impact for the people of Yemen, but it is currently not enough. A joint statement from UNICEF and the World Health Organization says the international community doubling its relief efforts is a good solution to the question of how to help people in Yemen, and can save the country from disarray for generations to come.