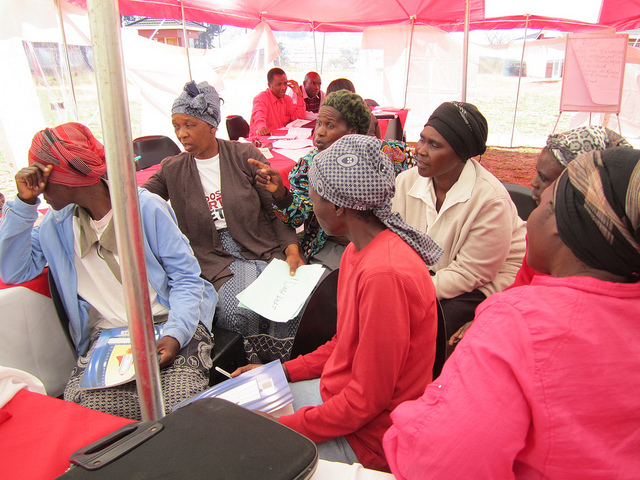 Though Swaziland has experienced quick and promising economic growth in the past decade, women remain left out of economic participation. Women make up 52 percent of the population in Swaziland, yet in 2008 they consisted of only 48.6 percent of the wage employment in non-agricultural sectors. In an effort to improve women’s empowerment in Swaziland, the African Health Observatory, which works with the World Health Organization (WHO), aimed to increase this percentage to 52 percent by 2015.

Women in Swaziland are not only left out of the country’s economic activities but also the country’s government. From 2008-2013, women made up 28 percent of the ministers in the national parliament, which increased from 20 percent during the 2003-2008 government. The Constitution sets the requirement at 30 percent, though many international bodies, including the African Union and the Southern African Development Community, have set their goal at 52 percent.

Formal employment opportunities for women in Swaziland are also scarce. It has a Gender Inequality Index (GII) of 0.557, which has ranked Swaziland 150th out of 188 countries.

Due to the lack of formal employment opportunities, women often resort to commercial or transactional sex as a way of making ends meet. Their work puts them at a higher risk of contracting a sexually transmitted disease. Compared to the 20 percent of men in Swaziland that have HIV, 31 percent of women from the ages of 15 to 49 have HIV.

Another factor that contributes to women having to turn to sex work is their lack of education. In Swaziland, many girls must drop out of school in order to work at home and provide support for their families.

Despite the work that is still to be done for women’s empowerment in Swaziland, considerable progress has been made. The Swaziland Rural Women’s Assembly (SRWA), whose goal is to raise the voices of rural women and to further progress in gender equality, has grown by over four thousand members since 2012. It has also mobilized over 20,000 women to more actively fight for change.

In 2016, the Swaziland Progressive Women’s Charter launched on International Women’s Day, March 8. Over 350 women took part in promoting the Charter, which is meant to reflect the voices of rural women. In the Charter, the women say that they recognize how necessary it is for them to unite and build a strong voice of advocacy.

Through the work of these organizations, considerable progress can be made to improving women’s empowerment in Swaziland.

The Success of Humanitarian Aid to Cameroon Infrastructure in Jamaica: Developing a Road to Safety
Scroll to top