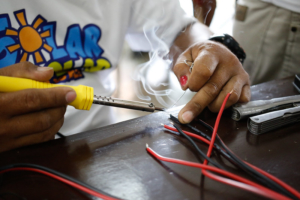 Natural disasters are a major threat to all, yet even more so when electricity is absent. Women in the Philippines utilize solar energy and TekPaks to better endure hurricanes. Renewable solar energy has been on the rise for those in poverty, due to its inexpensive and environmentally-friendly aspects. A group of strong Filipino women is taking charge to bring solar energy and life-saving technology to their town.

In 2013, tropical cyclone Haiyan hit the middle of the Philippines, killing 6,000 and displacing 4 million. With winds reaching 195 miles per hour, this was one of the biggest and most powerful typhoons ever recorded. One town, Marabut, managed to have zero casualties due to its evacuation plan. The town did not have a designated building to go to for safety. As a result, residents had to find shelter in a cave.

The Tinabanan Cave has provided shelter for centuries and is 32 feet high. When the typhoon hit, more than 1,000 people made the trek up a stairless hill to safety. Lorna dela Pena was alone in Marabut when the super-typhoon struck. She described how her “grandfather’s dream was for it to have stairs” when questioned on the evacuation, as Reuters reported. Building stairs and implementing solar energy became a priority after the tropical disaster.

The Philippines-based Institute for Climate and Sustainable Cities (ICSC) trained Lorna dela Pena and Azucena Bagunas, both from Marabut, as solar scholars. They use their training to educate their community and implement vital technology.

TekPak is a portable solar energy generator, which prepares communities for disasters preemptively. It is capable of powering phones, lights, kitchen appliances and more. The portable feature allows for easy evacuation and installation. Counting the number of people evacuated and communicating are greatly improved as well.

ICSC developed TekPaks and utilized them for storms since its first introduction. Azucena Bagunas described how ICSC used TekPaks “to power a nebulizer when someone had an asthma attack.” Additionally, it trained Pena and Bagunas on how to use TekPaks and educated others on its benefits.

Since electricity is a luxury for those in poverty, solar energy raises more ideas on its use, like harnessing solar energy as a replacement for coal energy. Not only is solar energy cheaper than coal, but it is safer as well. TekPak technology spread across the world for energy solutions and its new versions bring greater success.

Women Warriors in the Philippines

Bagunas and Pena work to educate and improve their community’s quality of life. Their women-led TekPak training sessions in their town make great strides to efficient evacuation drills and protocols. Women and children are among the most vulnerable to disasters, making solar energy a vital initiative.

Natural disasters disproportionately affect women since they “are more dependent on accessing resources that may be impacted.” Domestic work that women endure doubles during a disaster. Further, “women remain susceptible to poor health outcomes, violence and inequalities in all stages of a disaster,” according to Women’s Agenda. Solar energy provides solutions to many problems women face during and after natural disasters.

The use of solar lights rather than oil lamps has been extremely beneficial for the women in Marabut since it prevents crossing the sea for fuel. Collecting water after dark is hazardous for women yet once again, solar energy improves the task.

Solar energy brings affordability and renewability together. Electricity is vital for the development and quality of life in communities. Solar energy provides a unique opportunity for those far away from power grids to have power. Ending extreme and energy poverty starts with basic necessities.

Women in the Philippines like Pena and Bagunas provide education and innovation to natural disaster victims. With the continuation of their work, the future of solar energy is bright.