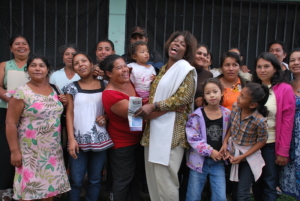 In 2019, almost half of the Honduran population lived on less than $5.50 a day, placing Honduras in the second-highest spot for poverty prevalence among countries in Latin America and the Caribbean. Poverty in Honduras disproportionately affects women — the female unemployment rate is nearly double that of males. Due to high levels of poverty, many Honduran women and girls struggle with period poverty in Honduras, which stands as an economic and social barrier to accessing feminine hygiene resources.

Lack of adequate menstrual hygiene products causes girls to miss school. A 2017 study found that 66% of Honduran students dropped out of school between sixth and 10th grades. In Latin America, 43% of students with periods prefer to skip school while menstruating. Another component of period poverty is the lack of menstrual education. A 2015 study found that 48% of mothers and 40% of adolescent girls in Honduras had not received education on why women menstruate. Despite the prevalence of period poverty in Honduras, organizations are working to eradicate this issue. One such organization is Pink Box Purpose.

What is Pink Box Purpose?

Wittig’s first-ever trip to Honduras inspired her to found Pink Box Purpose. While handing out feminine hygiene kits to women in the town of Olanchito, Wittig met a local teacher named Alba Carcamo who wanted to make the kits more accessible to her community. Two months later, Wittig, along with Patnode and three other women, returned to Olanchito to establish a reusable pad workshop, the “Hygiene Headquarters,” in a local community center. The Hygiene Headquarters employed five local women who took on the responsibility of sewing and distributing the pads.

Since the establishment of Pink Box Purpose in 2017, the organization has uplifted women and helped reduce period poverty in Honduras. Pink Box Purpose has distributed more than 8,000 pads to women and girls across the country. The team of local women has expanded from five 12 members, with the organization also employing three in-country liaisons.

Pink Box Purpose accepts donations directly on its website. Additional financial support through its “Gifts2Give” page helps to provide specific resources to the organization, such as sewing machines and feminine hygiene bags.

Although period poverty is still prevalent throughout Honduras, through Pink Box Purpose’s work, fewer women face this barrier. As this organization and other similar initiatives continue to do this important work, period poverty in Honduras may decline in the years to come.