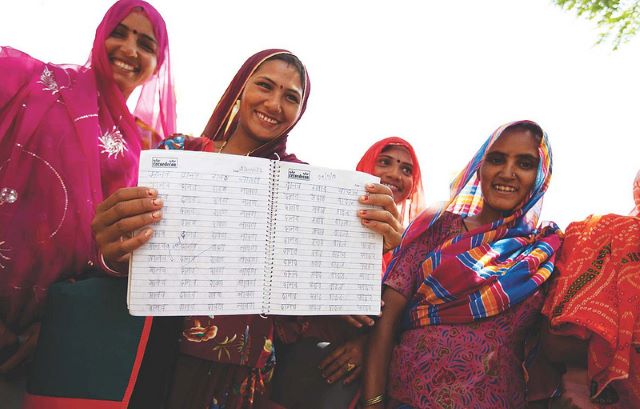 Globally, women are faced with the invisible burdens of gender inequality which are entrenched deeply within institutional structures and communities as a whole. These prejudices may limit a woman’s access to higher employment and assistance programs, ultimately leading to higher rates of poverty, especially among women of color. As of 2018, the poverty rate for women was 12.9% compared to the 10.6% rate among men. There are several reasons why women are more likely to live in poverty.

In many developing countries, women are more likely to be denied an education, as nearly 25% of all girls have not completed primary school education and two-thirds of women make up the world’s illiteracy rate. In Somalia, for example, only 7% of girls are enrolled in primary school. The lack of education among women may result in higher pregnancy and poverty rates. According to the United Nations Girls’ Education Initiative, a girl’s education is a driving force in their economic well-being. Somalia suffers from one of the world’s worst educational systems and is one of the poorest countries as well, having a poverty rate of 73%. With education, females can increase their access to higher-paying jobs, and thus, benefit the family’s income., which results in a positive cycle for generations, bettering the economy overall.

Despite having the same qualifications and working the same hours, women are more likely to get paid less than men. Worldwide, women earn nearly 20% less than men. These variances within wages affect women in low-paying jobs and poorer countries dramatically. Closing the gender wage gap can result in overall equal income distribution. In the United States alone, closing the wage gap would mean that half the poverty rate of working women and their families would be cut.

Around the world, many females may suffer from period poverty: inadequate access to hygienic menstrual products and menstrual education. The lack of education is related to the stigma periods carry. Periods have been associated with immense shame for a long time and this stigma is carried throughout communities, deeply limiting girls’ opportunities. Globally, periods are the reason why girls are absent from school at a disproportionate rate, as two out of three girls in developing countries are skipping school during their period. In India, 23 million menstruating girls drop out of school annually because of a shortage in hygienic wash facilities and products. Without an education, females are less likely to obtain a high-paying job and escape poverty.

One in three females globally fall victim to some form of domestic or sexual violence in their lifetime. Girls and women who grow up in poverty are also at an increased risk of experiencing such crimes. Victims of domestic or sexual violence can be impacted through the degradation of their physical or mental health, loss of employment or are ultimately driven into homelessness. Globally, females lose out on nearly eight million days of employment every year as a direct result of violent acts committed against them. According to a survey by the U.S. Conference of Mayors, domestic violence was the root cause of women becoming homeless in half of all the cities surveyed.

Economically, females are potentially burdened with the costs of pregnancy, including the additional fees of caring for a child, more significantly than men. Custodial mothers are twice as likely to be poor compared to custodial fathers. Further, unplanned pregnancies can be detrimental to a woman’s income as being unable to work immediately after giving birth means no pay, especially in the informal working sector. In the developing world, nearly 12 million girls aged 15-19 give birth each year, which often results in the end of the girls’ education and the beginning of child marriage. Children who are born from early pregnancies or marriages more often than not enter the same cycle of poverty and no education.

Malala Yousafzai started the Malala Fund after members of the Pakistani Taliban shot her for advocating the right for girls to be educated. Since then, Malala has built her project into a global initiative that furthers the goal of providing free quality education to young girls in developing countries.

Women for Women is an NGO that works to aid those who are in hostile conflict zones and are the victims of collateral damage. Women for Women helps to uplift these victims of violence by providing them with tools, support and education so that they may earn a living and remain stable through the direst of circumstances. Women for Women has helped more than half a million women in countries that have been directly impacted by war and conflicts.

Females in developing countries experience complexities that restrict their development and progression. Organizations are helping to raise awareness of these complexities and aid women in need. Since women are more likely to experience inequalities that push them into poverty, empowering women ultimately means alleviating global poverty.