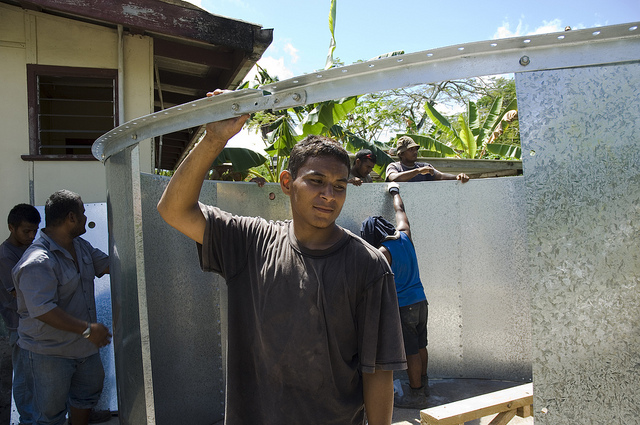 Surrounded by the Pacific Ocean, Nauru struggles to find secure potable water sources. The island has no rivers and the groundwater is limited due to increasing salinity and contamination, problems that make rainwater collection and desalination plants the only reliable sources of water for almost 10,000 Nauruans. As a result, the water quality in Nauru has suffered.

People in Nauru can take advantage of rainwater thanks to a system installed on the roofs of domestic and commercial buildings. A structure of tubes directs rain towards a small tank in which Nauruans store water, which can later be used for drinking and cooking.

However, between rainy seasons groundwater is the major source of water on the island. Unfortunately, the low water quality in Nauru means that groundwater is clean in few areas.

In the remaining areas, groundwater quality in Nauru is affected by wastewater disposal from houses, shops, commercial buildings and the refugee camp. In addition, some zones have an increasing salinity rate, which makes the water inadequate for human usage.

To resolve this problem, Nauru’s administration launched an expansion of the national water storage capacity in order to improve the water supply. The project consists of building more water tanks which will prevent water shortage during periods of drought. This solution also protects the environment since the desalination plants are energy-intensive and use fossil fuels for power.

In 2014, water quality in Nauru took a remarkable turn with the development of a project by the Nauruan government to install a solar PV system and desalination plant. It is expected that this project could produce 100 cubic meters of safe water per day. In addition, the PV system will generate 1.3 percent of the energy demand in the island, doubling the existing energy production of solar energy. With these advantages, the project would also reduce water delivery to only three weeks.

Nauru has a refugee camp that holds about 400 refugees that tried to enter Australia by boat. This camp requires water and other basic necessities such as shelter, food and clothes. As a result, when people in Nauru face water shortage, refugees also experience the same difficulty.

The PV system desalination plant and the new storage tanks that the Nauruan government is planning to implement are good solutions to addressing water quality and supply in Nauru for both citizens and refugees alike.