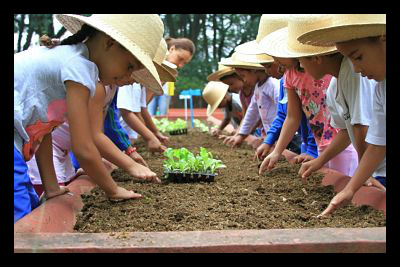 Latin America is the most urban region in the world. But from Cuba to Mexico to Argentina, issues of food insecurity and urban poverty persist. Several factors contribute to agricultural instability in Latin America. Climate change is affecting crop yields, and urban sprawl has pushed farmland further from cities, into areas with low soil fertility. Additionally, many Latin American countries are shifting their production energy from agriculture to tourism ventures, which means that food imports are now exceeding exports.

A recent report from the Food and Agriculture Organization (FAO) of the United Nations examines the progress made in cities pursuing urban and peri-urban agriculture (UPA) policies. The study surveys 23 countries and 110 cities throughout Latin America, revealing the enormous benefits that urban farming has for city-dwelling populations.

Poverty in modern-day Latin America has as much to do with hunger as with obesity. Non-communicable diseases, including diabetes, hypertension, heart disease and some forms of cancer, have become enormous health threats and financial burdens for Latin America. In fact, these “lifestyle” diseases kill more people than infectious diseases such as malaria, HIV and tuberculosis in every region except sub-Saharan Africa.

The root of this troubling phenomenon lies in the scarcity and high cost of nutritious food options, which denies the poorest segments of society access to a healthy lifestyle. In Latin America, urban farming is breaking down these barriers and bringing fresh, local foods into impoverished homes.

UPA’s potential can be seen in Havana’s 97 organoponic gardens, which use new agricultural technologies involving organic substrates in the face of seed, pesticide and fertilizer shortages. Today, 90,000 residents of Havana practice UPA, bringing sustenance to a population long harassed by food crises and rationing.

Cubans began planting food wherever they could find space after the collapse of the Soviet Union in the early 1990s. Economic mayhem ensued, and fertilizer and pesticides were nowhere to be found on the island. Out of necessity, Cubans built small urban gardens and, with strong government support, the practice was transformed from a grassroots response to food insecurity into a concrete national priority.

Although many Latin American countries practice urban agriculture, only half of the 23 countries surveyed in the FAO report have national policies explicitly promoting UPA. Graeme Thomas, author of the report, states, “Where the sector has strong governmental support from national to local level… it has a far greater impact in terms of improving urban food security and contributing to people’s livelihoods and local economic development.”

Leaders in Latin America would do well to invest in the development of UPA initiatives. Urban agriculture has notable health, economic and social benefits as it grants impoverished households access to nutritious, local fruits and vegetables, encourages local economic development and places food sovereignty into the hands of the people who most desperately need nourishment.