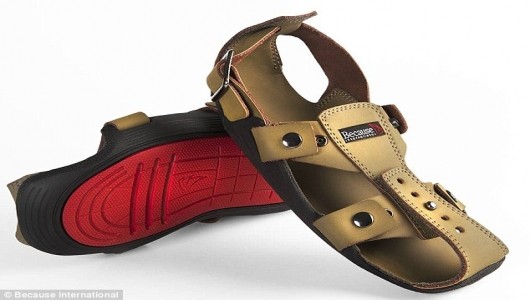 Idaho native Kenton Lee’s “The Shoe That Grows” has seen quite a bit of media frenzy for its fascinating innovation. An idea that has been in the making since 2007, the unique invention could serve as the answer to those in developing regions who lack shoes.

Following his 2007 graduation from Northwest Nazarene University, aspiring philanthropist Kenton Lee embarked on monthly mission trips from Ecuador to Kenya. What would soon catch his attention was a stop at a Kenyan orphanage, where over 140 children with parents who died from AIDS resided.

While walking to a church, the fresh graduate spotted a 6-year-old girl wearing a white dress and a pair of shoes that were “four- or five-sizes too small.” They were so undersized that holes were made for the girl’s toes to hang out. Lee was also astonished by the unsanitary conditions within the orphanage, including a lack of clean water and on-and-off electricity.

Following the sighting, Lee spoke with the director of the orphanage to seek further information as to why the young girl and others lacked durable footwear. The director disclosed to Lee that shipments of shoe donations were made a year prior, but because those in need happen to be kids, they easily outgrow the shoes as they age. The optimistic designer later found that over 300 million children in developing countries lack shoes, resulting in the contraction of soil-transmitted diseases such as threadworms and Guinea worms.

Upon returning to the United States, Lee sparked an idea that could maintain comfortable footwear to poverty-stricken children in developing regions. That idea was The Shoe That Grows, but Lee knew his plan would not come to light if he did not seek help from a supportive team of volunteers to push his idea into effective force.

The year 2009 would mark Kenton Lee’s founding of Because International, a nonprofit organization to help propel the innovative shoe idea into the media. Following backfire from failed efforts to get big-name shoe companies like Nike onboard, Lee and voluntary members partnered with shoe development company Proof of Concept to pull the “growing shoe” design together.

Lee would explain in an interview with Buzzfeed that the base of the creation is a sandal made with compressed rubber material similar to tires. It was also indicated that the sandal could last up to 10 years with the help of durable leather and heavy-duty buckles.

The optimistic contributor later added in 2011 that the shoe could grow from a size 5 to a size 12, enabling users to adjust their shoe as their feet grow.

In 2012, Kenton Lee shared that, because Proof of Concept undergoes a 16-week shoemaking process, funding support would be urgently needed. Hence, in October 2012, Lee and Because International launched a two-week fundraising campaign via Crowdrise to meet a desired goal of $4,000 in order to produce a prototype of the innovative shoe. When enough money was raised, Lee and his wife traveled back to Kenya to test out 100 prototypes in four schools. Much to his liking, the disadvantaged schoolchildren “loved them,” and with a few tweaks, Lee had the final product ready in 2014.

In October 2014, Idaho news station KTVB was among the first to get a glance of the finished product, and they later disclosed on their official website that each pair would be sold for $10. The following year, British publication Daily Mail noted that the sandal-based wear had increased by $30. However, it also said that if 100 pairs were purchased, the price would be reduced to $12.

Alternately, Because International launched a digital page requesting willing donors to contribute $15 to fill duffle bags with 50 pairs of shoes each. Once filled, each bag is sent off to its destination to aid shoeless people.

While the growing shoe has accumulated praise, a few critics have remained skeptical of its potential performance, arguing that the product will fail like previous similar ideas attempted by other shoemakers. For example, created in 2002, the company INCHworm designed footwear that retained an accordion-like segment that could expand three sizes. However, the product immediately faced criticism when stockers failed to understand its purpose due to the shoe “only filling one niche,” and only serving as a “casual slip-on,” rather than being marketed as a sneaker or a dress shoe. Moreover, its price of over $45 did not sit well with consumers, which resulted in American disinterest and limited production in the United Kingdom.

By a stark contrast, Kenton Lee’s invention is not strictly designed for American sale, but rather for a wider release overseas for the betterment of underprivileged kids. With the global sale in perspective, individuals like Jacksonville State University professor Pam Hill hope the product is not “just limited to tropical or sub-tropical regions,” but is also geared toward children in “inclement [or] snowy” regions who lack the same essentials.

Some have been weary of the product’s production in China, where they hope the procession units will not add any unnecessary material that could pose as a harmful threat to the children. Lee, however, has noted that the factories have been long proponents of Proof of Concept.

With five nonprofit establishments backing the product, alongside a successful $50,000 crowdfunding campaign, 2,500 units have been sold in disadvantaged regions from Colombia and Peru to Kenya and Haiti. The Shoe That Grows is ready to make an impact. But when success is ultimately achieved, what will be next on Lee’s list?

Lee and Because International plan to produce a second project, tentatively titled “A Better Bed-net,” which will supply bedding to orphaned kids in mosquito-infested areas. The bedding is to be equipped with netting that will trap disease-carrying mosquitoes that try to make their way into orphan shelters. For now, Kenton Lee and his supportive network are carefully taking one step at a time to ensure that they are truly living up to their motto: “Making things better by making better things.”