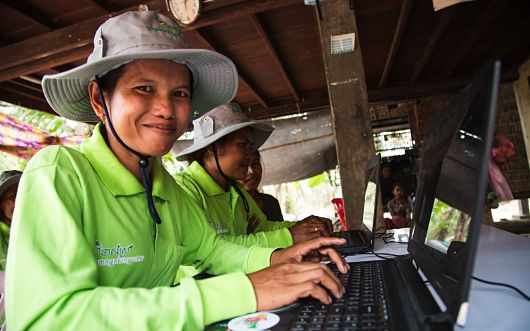 A report released by the World Bank shows that while technology has expanded, more people have remained poor. This phenomenon is often referred to as the digital divide.

The World Bank finds that more households in developing countries own a mobile phone than have access to electricity or clean water, according to “Digital Dividends,” its 2016 World Development Report.

The digital divide is created because most benefits for private enterprises arrive instantly, such as streamlined communication and information, online convenience and social connectivity throughout the global community.

The investments from these enterprises would ideally generate employment growth and services for those in the developing world — but progress there is more stagnant.

According to the World Bank report, digital dividends have not grown at the same rate as digital technologies because 60 percent of the world’s population does not have Internet access and are therefore unable to participate in the digital economy.

There are also emerging risks – such as polarized labor markets and inequality – that contribute to the digital divide. Routine jobs are replaced when technological advancements are made, which means more unskilled individuals compete for fewer low-wage jobs.

To combat these effects, solutions include infrastructure investment, providing worldwide Internet access and monitoring offline factors of technologies by region.

“While technology can be extremely helpful in many ways, it’s not going to help us circumvent the failures of development over the last couple of decades. You still have to get the basics right: education, business climate and accountability in government,” said Digital Dividends Co-Director Uwe Deichmann.

Education in the developing world can provide people with the skills needed to utilize digital technologies and become more productive in the workplace, which reduces polarity within the job market, according to the World Bank.

Accountable government agencies should implement policies and regulations that create a competitive digital market so that information costs go down and societies have the opportunity to become more inclusive.

Though growth has slowed in the developing world, organizations have found ways for the poor to benefit from the information and communication technology sector.

Question Box exists as a telecommunications network that provides populations suffering from high illiteracy rates and social or technical barriers with access to information.

According to the Guardian, Question Box has installed a series of ‘call boxes’ in areas of Uganda, that connect disconnected communities to someone with Internet access who can relay answers to questions regarding health, employment or other related issues.

Otherwise disconnected communities have the ability to create successful societies if given access to the digital information many of us take for granted.