Tag Archive for: Hunger in Nigeria 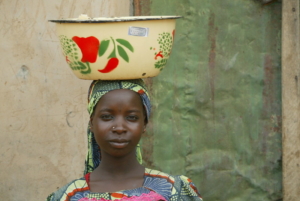 Yahabba Adam, 30, smiled in the Maiduguri city center in Nigeria. Her four children would eat that day. She searched the market, and the $47 (NGN 17,000) provided by the World Food Programme’s (WFP) cash assistance program filled her wallet and heart with hope. Adam is one of 5.1 million Nigerians who are food insecure and in need of assistance. Conflict in the Northeast has heightened food insecurity and hunger in Nigeria, with another 7.7 million people now in need of humanitarian assistance.

The Boko Haram Insurgency and Crisis in the Northeast

In northeastern Nigeria, Boko Haram insurgency attacks and other conflicts have displaced two million people. With assistance from Benin, Chad, Niger and Cameroon, the Nigerian military has expelled the group from several northeastern provinces. Boko Haram still holds control over villages and other small territories. It continues to launch deadly attacks, often against women and children. These attacks have contributed to a decline in agricultural production through the destruction of productive equipment and the displacement of farmers. In 2017, two senior politicians in Nigeria’s Borno state, which is the epicenter of the insurgency, sent a message to Boko Haram. Kashim Shettima and Olusegun Obasanjo donated 36 metric tons of maize, cowpea and rice seed and hundreds of new tractors to farmers. The officials saw an opportunity for the region to move forward in agriculture despite the conflict. The northeast region of the country has a history of chronic food insecurity. Unfortunately, it is now in what the Famine Early Warning System Network describes as the crisis or emergency stages of acute food insecurity. Almost three million people in the region are food insecure, according to the WFP. In November 2019, Cadre Harmonisé, a regional group that aims to diminish hunger in Nigeria, released a monthly report. It estimated that 2.6 million people in the Adamawa, Borno and Yobe states were severely food insecure. Without continued humanitarian support, the report projected the number would rise to 3.6 million by mid-2020.

There have been 35,454 confirmed cases of COVID-19 in Nigeria and 772 deaths, according to Johns Hopkins University. The pandemic is affecting every aspect of Nigeria’s economy. “Countries like Nigeria are large food importers but are now being doubly hit – by COVID-19 and by plunging oil prices, the country’s main source of revenue, decimating the government’s budget and making food and other imports even more expensive,” said Julie Howard, a senior adviser on global food security at the Center for Strategic and International Studies (CSIS). COVID-19 is threatening the already fragile state of hunger in Nigeria. Citizens across the country are going against pandemic regulations to sell small items or beg for food on the streets. In Lagos, Nigeria’s commercial capital, the federal government and humanitarian organizations distribute free food to people whose food supply has been cut off by pandemic safety measures. However, many risk stampedes to get the food and some leave empty-handed.  “We were scrambling for food when my sister with a young baby on her back was pushed away, and she had to give up,” said Folashade Samuel, a resident of the Lagos slums. “The situation is very, very tough. It is very dangerous to scramble for food because you can fall and get trampled on.” Additionally, lockdowns and border closures within the nation pose a danger to the agricultural sector, which forms the base of the Nigerian economy. For most Nigerians, agriculture serves as the primary source of livelihood, with the sector employing 36.5% of the entire labor force. More than 30 million naira (about $77,500) had been lost as of May 2020 in the yam markets alone because of the pandemic lockdowns. In order to combat the pandemic’s adverse effects on agriculture, the Nigerian government created a task force. This task force is creating ID cards to allow agricultural workers to move freely. The agriculture ministry and central bank are working to provide support through locally produced fertilizers and financial expansion for farmers.

This June, the Nigerian government launched a seed support initiative in partnership with a group of agricultural research institutes and programs. The initiative worked to deliver improved seeds to farmers in 13 states in order to lessen the harmful impact of the pandemic on hunger in Nigeria. In Adam’s home city, Maiduguri, the United Nations Humanitarian Air Service (UNHAS) received presidential clearance to continue emergency operations, which include delivering food. The WFP manages the UNHAS. While its operations are limited, this humanitarian aid provides support similar to the $47 Adam carried that day in the market. Along with managing UNHAS, the WFP distributed food and cash assistance to 1.2 million Nigerians in 2017 and 2018. During the pandemic, the WFP has continued its outreach and efforts to curb hunger in Nigeria, assisting 632,500 people with food and nutritional needs. Because schools often provide a much-needed source of food for children, the WFP is also supporting the government in adjusting the national home-grown school feeding programme to reach nine million children while schools are closed. Many people in Nigeria face hunger and are in need of help. The Boko Haram Insurgency and the COVID-19 pandemic have exacerbated the problem of food insecurity in the country. As a result, the government and outside organizations are stepping in to help those in need and work to decrease hunger in Nigeria.  – Olivia du Bois
Photo: Flickr 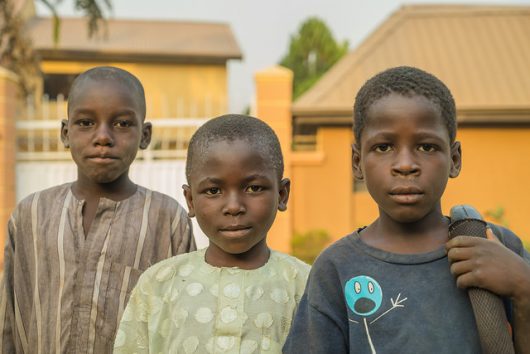 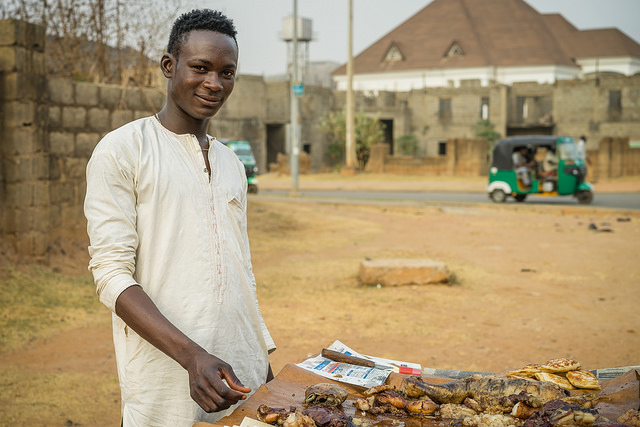 The number of people who experience food insecurity in Nigeria is rising. Of Nigeria’s population of more than 160 million people, the number of undernourished people has increased from 10 million in 2010 to almost 13 million in 2012 and has been growing since.

Agriculture is the country’s main source of income, making up a staggering 40 percent of the country’s GDP. Yet, despite this, Nigeria is number 40 out of 79 on the Global Hunger Index. Though the country has grown its GDP from the six percent it was in 2008 to 8.4 percent in 2010, it remains that over 80 percent of the rural population in Nigeria live below the poverty line.

The Nigerian Government and Internal Programs

There have been various programs created by the country’s numerous governments to end food insecurity in Nigeria. Such programs are:

Unfortunately, these programs have all had dismal performances, and have all individually hindered – some have even contributed ­– to low agricultural and food production in Nigeria.

Gender is a Factor

Unsurprisingly, gender inequality in Nigeria can also be blamed as a major factor for the food insecurity in Nigeria. The women of Nigeria make up the majority of agricultural workers, though they are often underpaid if paid at all. Nigerian women have less and limited access to agricultural assets like inputs and service than their male counterparts. It is believed by analysts, that if women had the same access to productive resources as men, they could increase their crop production by 20-30 percent.

The major cause, however, for much of the food insufficiency in Nigeria is the conflict and violence which has been largely due to ethnic and religious tensions in the northeast of the country. As of March 2018, the number of internally displaced persons has grown significantly. The displacement of people in Nigeria has increased to the concern of food insecurity. Over 650,000 people in the Borno State, alone, are at extreme, limited access to agricultural land and labor opportunities, and are thus, heavily dependent on assistance.

As seen in the Borno State, violence and displacement of people disrupts agricultural production and makes people dependent on emergency food assistance. The number of displaced persons is rising: as of April 2018, Boko Haram and the Islamic State of Iraq and Syria was responsible for displacing more than 1.7 million people throughout Nigeria. Moreover, the summer months are the hardest for crops to grow in Nigeria. It is estimated that in the months of June through August of 2018, over 3 million people throughout the Northeast of Nigeria will face a food insufficiency crisis or worse.

International assistance is there. For instance, the USAID Office of Food for Peace (FFP) has provided emergency food assistance in Nigeria since 2015. The FFP works with non-governmental organizations to provide and distribute locally-purchased food, food vouchers, and cash transfers to over 800,000 people in dire need. Moreover, merged efforts between the FFP and the U.N. World Food Programme (WFP) ensure that supplementary food supplies reach children and pregnant and lactating women to prevent acute malnutrition. Per month, this pairing of the FFP and WFP has helped provide over 1 million Nigerians with food since December 2016.

Almost all of the factors which create and add to the food insufficiency in Nigeria are man-made problems. Though Nigeria is not a poor country, its developmental management has been poor. It is believed that alongside the aid of international organizations like the FTP and the WTP, these problems need to be individually and properly addressed. If done so, then solutions will become apparent, and the problem of food insufficiency in Nigeria will quickly be resolved.