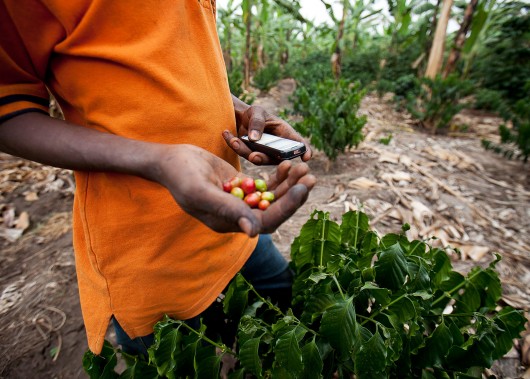 Nowadays, it seems everything can go viral on the Internet in seconds, from a social justice movement to a funny cat video. But what do people in developing countries do to share ideas, ask questions and communicate with their peers who live in remote areas without the Internet as a permanent fixture in their lives?

According to the Huffington Post, there are currently about 500 million smallholder farmers around the globe. On average, these agriculturists live on less than $1 a day.

In order to survive year after year, many small farmers have developed low-cost, effective solutions to the everyday problems they face. Until recently, these solutions could travel no farther than word-of-mouth could take them.

In 2014, WeFarm was founded with the mission of becoming “the internet for people without the internet.” The organization offers peer-to-peer communication amongst farmers in developing countries. Users can ask and answer questions using SMS or text messaging. The service is offered to smallholder farmers free of charge.

The service translates queries and advice so that small farmers from around the world can communicate and share the valuable information they have accumulated through their personal experiences. So far, over 100,000 answers have been provided to the 43,000 farmers registered to the program.

The founders of WeFarm thought strategically about how to make information available to all the small farmers who live without the Internet. Six billion of the world’s seven billion citizens have access to a mobile phone but only 25 percent of the global population has an Internet connection. SMS is a far more trafficked channel of communication for the world’s poor, compared to email or Internet messaging.

WeFarm has big plans for the data collected by the service. The organization sees the questions farmers are asking and answering as an opportunity to address some of the major issues inhibiting food production around the world.

The data gathered by WeFarm’s service is sold to major food producers to give them a sense of the daily struggles faced by small-scale farmers. The buyer companies can use this information to better analyze the issues and develop long-term strategies to address them.

According to Zoë Fairlamb, a spokesperson for WeFarm, “Small scale farmers produce 70 percent of the world’s food globally. Global brands rely on what small scale farmers are producing, yet they have next to no visibility on what is going on at the bottom of the supply chain. A lot of food is wasted in this way through very preventable diseases.”

Though WeFarm has already taken significant strides toward a more sustainable farming system, this is only the beginning for the organization. According to the Huffington Post, WeFarm is currently seeking investments in order to expand and reach one million farmers by the end of 2016.

As a connector of major players in the food industry and small farmers across the globe, WeFarm is in a unique position to change the way the world grows food and transfers information.

As Fairlamb put it, “WeFarm wants to be about changing [the] conversation and giving [farmers] a voice, showing their knowledge is valuable and giving them a way to share that information.”