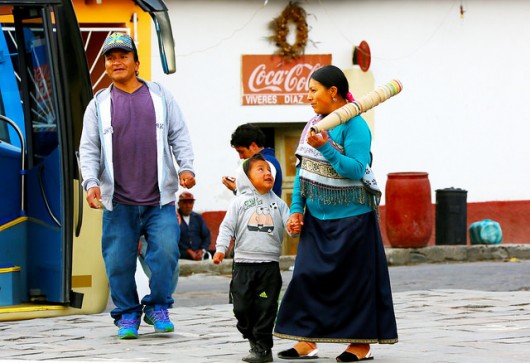 Ending extreme poverty within one’s borders takes time, hard work and commitment. One South American country that has shown such commitment is Ecuador. Thanks to the work of its leaders in making poverty reduction their top priority, 1.9 million Ecuadoreans, about 16.5 percent of the population, were lifted out of poverty from 2009 to 2015.

President Rafael Correa, who was first elected in 2007, made improving the lives of Ecuador’s poor his central theme, with the belief that: “Socioeconomic poverty will be fundamentally solved through changes in the relations of power […] through political processes.”

Before eradicating poverty, however, it must be measured properly. To this end, Ecuador uses a multidimensional index. Most countries and organizations rely solely on income or consumption rates to define a poverty line but Ecuador’s index covers four areas: education, work, health (including access to food and water) and housing. Using this rate, 51.5 percent of Ecuadoreans were poor in December of 2009 compared to 35 percent in 2015.

The World Bank also lauds President Correa for his efforts. They report that from 2006 to 2014, poverty, as measured by income, was reduced from 37.5 to 22.5 percent; extreme poverty was also reduced from 16.9 to 7.7 percent.

Furthermore, they report that Ecuador’s Gini coefficient of inequality was reduced from 54 to 48.7 over the same period. This happened because the poorest Ecuadoreans experienced the fastest wage gains. From 2000 to 2011, the incomes of the lowest 40 percent grew by 8.8 percent compared to a national average of 5.8 percent.

Ecuador’s success can be largely attributed to economic factors and smart decision making. In 2000, they adopted the dollar as their national currency, ending the wild bouts of inflation that could destroy a poor family’s life savings in the blink of an eye.

Then, in 2007, the government set a minimum wage and improved its social security. As labor shifted into more diversified, higher paying sectors, incomes rose for many of Ecuador’s poorest. The minimum wage guaranteed a certain standard of living for employed people, raising wages for many in the agricultural sector.

Next, Correa’s government focused on redistribution. High oil prices throughout the 2000s helped keep export dollars flowing and the government signed contracts giving itself more revenue. This money was spent on health, education and establishing government services in rural communities, significantly benefitting the poor. As a whole, government spending increased from 4.7 percent of GDP when Correa took over in 2007 to 8.3 percent of GDP in 2012.

As Ecuador’s economic situation improved, so too did the welfare of its people. Children received better nutrition, household consumption increased and more families sent their children to school instead of to the field. Domestic demand also increased, leading to new service jobs in a country where, 20 years earlier, they largely did not exist.

In 2016, Ecuador faces a number of challenges. Falling oil prices, a weak Chinese economy and an overreliance on exports mean that Ecuadoreans will have trouble in the near future. Yet their success in poverty reduction through smart development and redistribution cannot be denied. Ending extreme poverty will not happen overnight but through strong leadership, dedication and a national effort, Ecuador has made great strides.