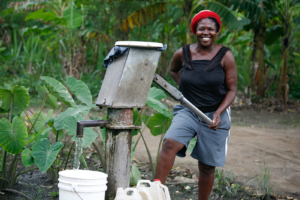 Political corruption and unstable governments can be a huge problem for organizations trying to bring aid to a developing country. On top of the already difficult logistics, corrupt governments can heap on restrictions, red tape and, at times, cause violence. The 2008 Transparency International’s Corruption Perception Index ranked Haiti at number four of the most corrupt nations in the world. This same Index also ranked Haiti as the most corrupt country in the Caribbean region in a 2013 study. This political corruption was the main difficulty faced by Brian Merriam and his Rotary Club Chapter when they tried to aid efforts for water relief in Haiti in 2014.

Merriam took to heart something that his father always said, “find the greatest problems in your community and find a way to solve them.” It was this motto that led him to first visit Haiti in 1999 with the Episcopalian organization, Food For The Poor. What Merriam saw shocked him, “I traveled the world when I was fifteen,” said Merriam “I’ve seen poverty but never the amount of Haiti.” With 59 percent of the country surviving on less than $2 a day, Haiti it the poorest country in the Western Hemisphere.

A Lack of Clean Drinking Water

After a few more visits to the country, Merriam knew something had to be done. Getting everyone from his Rotary Chapter to help was the easy part. Having been to Haiti several times Merriam knew the problems facing the nation and how to help. “Haiti isn’t lacking water,” said Merriam, “it’s lacking clean drinking water.” More than 90 percent of the country has been deforested, leading to poor soil quality. This combined with the country’s predominantly porous limestone bedrock makes the water that comes up from the earth unfiltered and unhealthy to drink.

The condition of the water supply is made only worse by the nation’s poverty. People wash themselves and their clothes in Haiti’s waterways, further contaminating the water. With more than two-thirds of the population unemployed, many families can’t afford bottled water. They are forced to drink from these polluted bodies of water instead. With this in mind, the Rotary Club Schenectady Chapter brought filtration systems to the community of Matogou in 2014 in order to boost water relief in Haiti.

Along with the many natural factors, an increase in political protests and the proceeding violence have further crippled the country’s ability to distribute aid. This has made it more difficult for organizations to facilitate water relief in Haiti. Large mobs, vandalism and blocked roads make it harder to get basic goods out to Haiti’s most needy.

The tumultuous protests are a reaction by the Haitian people to both the corruption of President Jovenel Moise’s and the ineptitude of the Haitian parliament. According to Haiti’s senate, President Moise and his predecessor, Michel Martelly, embezzled as much as $2 billion. That money was supposed to go to Haiti’s poor to improve their infrastructure, health and education systems. Adding to the instability, the Haitian parliament failed to ratify a government or appoint a new Prime Minister after the ousting of their last one, Jean-Henry Ceant.

Merriam knows firsthand the difficulties this kind of political instability can cause. The largest problem for the Rotary Club was not financial, nor was it logistical. Getting the water filtration systems to the intended people intact was the real difficulty. Merriam recalls having to sneak the filtration systems past customs, “We have to smuggle them into the country. Not cause they’re illegal but because I’ll get extorted at the airport if they know I have them.” After getting the filtration systems past customs, Rotary Club was ready to bring them into the communities that desperately needed water relief in Haiti.

The Rotary Club Schenectady Chapter has changed lives for the better by increasing water relief in Haiti. The water filtration systems Rotary installed have a shelf life of 10 years and can filter out 99.99 percent of bacteria from 1,000,000 gallons of water. Each system can provide clean water to 40 people per day. The organization shows communities how to maintain and clean the filtration systems. Rotary club exceeded its goal in providing 24-hour clean water to Matogou.

It is Merriam’s belief that people born into good fortune have to social obligation to help those less fortunate than themselves. “We are on this one globe and if we don’t make it better, we’ve squandered it,” said Merriam. It is this attitude that has led him to fight for the people of Haiti for 20 years. His actions through the Rotary Club have provided much-needed water relief in Haiti.