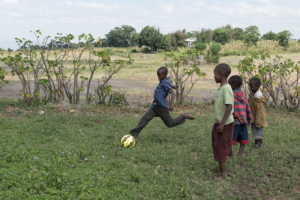 The Chilean poet Pablo Neruda once said that “a child who does not play is not a child.” Play, as defined by the World Economic Forum, is “freedom for children to engage with and learn from the world that surrounds them.” However, for millions of children in poverty, play is “an elusive luxury.” “Play poverty” is a term describing this scarcity of play among socio-economically disadvantaged children.

With rising research on the benefits of play on child development and performance, “play poverty” has become the focus of several NGOs and well-known organizations, such as FIFA.

The Power of Play

The World Economic Forum states that “Play is the rocket fuel of child development.” Psychologists believe play is crucial for brain development. Specifically, play “promotes connections between nerve cells, helps develop motor skills and coordination” and trains the brain to make sound decisions at an early age. As a result, the brain develops the “cognitive, emotional and social intelligence” that adults rely on.

In poor regions, many children are forced to forego their education to work or care for their families. In the regions most prone to low enrolment rates and the harsh realities of life, “time for play is often displaced by the chores and responsibilities that are so familiar to children growing up in poverty.” According to Right to Play, an NGO aiming to empower vulnerable children, play helps children stay in school while protecting them from exploitation and benefiting their future. Additionally, play helps children escape from “their harsh reality” of poverty, war and natural disasters.

Current Efforts by FIFA and Adidas

Adidas, FIFA and the FIFA Fan Movement, an organization connecting FIFA and the people, have collaborated to give ball donations to NGOs fighting for social good. The pandemic has left thousands of footballs unused; with sustainability in mind, the FIFA Fan Movement nominated 34 NGOs around the world and nine were selected. FIFA believes that their donation will help support “sport as a tool for building life skills such as teamwork, communication, hard work, discipline and a healthy outlet of physical activity.”

In Tanzania, despite no school fees since 2015 in lower through secondary school, roughly 2 million children under the age of 13 are currently not enrolled or attending school.  About 70% of Tanzanian children between the ages of 14 and 17 are not enrolled in secondary education. Unsurprisingly, UNICEF found that “primary school-aged children from the poorest families are three times less likely to attend school than those from the wealthiest households.” The children are not out-of-school due to the financial burdens of education it is partially free. The reason is that Tanzanian parents often rely on their children to be a further source of income or guardianship. Unfortunately, this often forces children into vulnerable positions such as working under hazardous conditions or early child marriage. In fact, two out of five Tanzanian girls get married before the age of 18.

Luckily, Jambo for Development, a Tanzanian-based NGO, is one of the nine organizations to receive 108 footballs from FIFA. The NGO’s mission, which has a long history of support from FIFA, is to enable all children to have an equal opportunity at achieving their dreams. With FIFA’s help, Jambo for Development has a good chance at making some Tanzanian children’s dreams come true, as they will be equipped “with the skills and tools to address and embrace the new realities of tomorrow.”