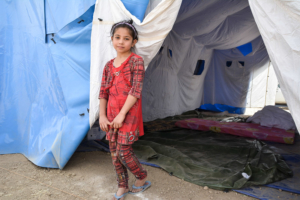 Iraq has confirmed 212 cases of Crimean-Congo Hemorrhagic Fever (CCHF) between the months of January 2022 and May 2022, 27 of which resulted in death. In April and May alone, Iraq reported 169 of these cases to the World Health Organization (WHO). CCHF is a viral tick-borne disease “transmitted to humans by bites of infected ticks and by direct contact with blood or tissues from infected humans and livestock.” The viral disease is endemic in Africa, the Balkans, the Middle East and some Asian countries. Iraq’s CCHF outbreak is not the nation’s first, but it is the most recent and among the deadliest. Iraq and the WHO are taking measures to slow the spread and help the infected, including dispatching an epidemiological investigation team to a heavily infected region and treating animals suspected of carrying the disease. There is currently no vaccine available but health care professionals can treat the disease with the antiviral drug ribavirin, though its full effectiveness is unknown.

CCHF is a tick-borne disease and most commonly arises from exposure to livestock, meaning that people working in the industry, such as farmers and butchers, are at increased risk. The first experienced symptoms of the virus include headache, fever, back and joint pain, stomach pain, vomiting and a flushed face. People who have had the virus for longer may experience severe bruising and nosebleeds, which could lead to hospitilization.

The Middle Eastern country of Iraq has a long history of contact with the virus and considers it a year-round threat. However, this recent outbreak has proven to be widespread, reaching many regions of the country and taking lives along the way. Iraq’s CCHF outbreak has earned the attention of the WHO, which is working with Iraq’s Ministry of Health to help contain and treat the outbreak.

The WHO has released a risk assessment, stating that people living in rural areas of Iraq are at a greater risk of contracting the disease, since livestock is abundant. The WHO also warns that the upcoming religious holiday Eid al-Adha may worsen the outbreak considering that citizens will slaughter more livestock for the holiday and there may be cross-border transportation of animals.

The collaboration between the Ministry of Health and the WHO during Iraq’s CCHF outbreak is a cause for hope. An epidemiological investigation team is currently working to locate the original point of contact for the current outbreak, which will hopefully lead to more focused treatment. The WHO conducted a three-day workshop in March 2022 with local physicians, veterinarians, lab technicians, health workers and disease investigators, designed to increase the capacity of Iraq’s rapid response team. The training served as a source of information, better preparing the country to handle future outbreaks of CCHF.

The WHO has released many recommendations to the people of Iraq to help curb the spread of the virus and has provided resources for obtaining information and treatment. Since CCHF is a year-round threat in Iraq, the nation is prepared to treat cases of the virus, but the sudden influx of patients proved to be overwhelming. With the backing of the WHO, it is likely that this outbreak will soon slow and become manageable once again.