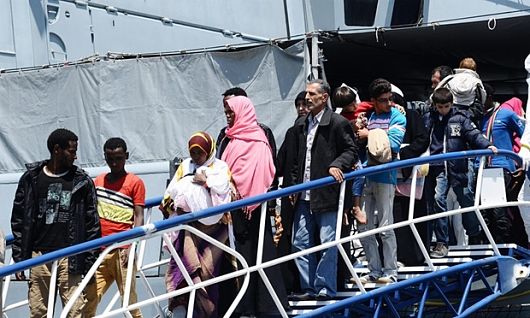 At the start of July 2015, plans were announced for Britain to spend more than 300 million pounds in international aid, which is targeted towards Syria and the Sahel Region of Africa and includes countries such as South Sudan, Sudan, the Central African Republic and Nigeria. The money is supposed to help stabilize the lives of people in those regions in order to relieve the Mediterranean migrant crisis by reducing the influx of migrants traveling to the European Union, especially to Italy and Greece.

As the Washington Post states, migrants flee from their home countries to Europe because of poverty, civil war, violence and political instability. The largest number of migrants by boats are Syrians, who are attempting to flee from a civil war which has left over 200,000 dead and more than 4 million displaced. The second greatest number of refugees comes from Eritrea, which is suffering from economic issues, a repressive government and forced conscription. A large number of migrants also come from Libya, Mali and Nigeria.

The journey across the Mediterranean by boat is very perilous, and migrants cross because they have no other choice. They normally pay a smuggler who forces them into an old and unreliable boat (sometimes at gunpoint) and often leaves the boat halfway across the Mediterranean, relying on rescue teams from Italy and other E.U. countries to get the migrants safely to shore.

Some blame the rescue teams for the influx of immigrants. While it is true that large numbers of people attempt the dangerous journey across the Mediterranean in order to migrate into Europe — there were 220,000 unauthorized immigrants in Europe in 2014 — the rescue teams are not to blame for the large numbers of people attempting the crossing. Since Italy shut down its Mare Nostrum rescue program last October, numbers of migrants trying to cross the Mediterranean remained about the same. However, the death toll jumped dramatically. From January to April 2014, only 96 died while crossing the Mediterranean, compared to 1,500 during the first four months of 2015.

Nevertheless, some are still convinced that rescue teams are responsible for the higher number of people attempting to cross the Mediterranean, and the situation has led to the rise of the far-right in Europe, especially in Italy and France, where levels of anti-immigrant rhetoric are high.

In reality, migrants only try to cross the Mediterranean because they do not have another choice. As one migrant put it, “We are between hell and the deep blue sea.”

Britain hopes that the money it is adding to the international aid budget will help lower the number of migrants by increasing political stability in regions that are suffering. However, even if Britain’s plan works, it is still unsure what will happen to those who have already migrated to Europe. There were plans to relocate 40,000 Italian and Greek refugees to other parts of Europe, but those plans appear to have stalled due to anti-immigrant sentiments.

Sources: Express, The Guardian, Washington Post, The Independent, The Atlantic
Photo: The Guardian