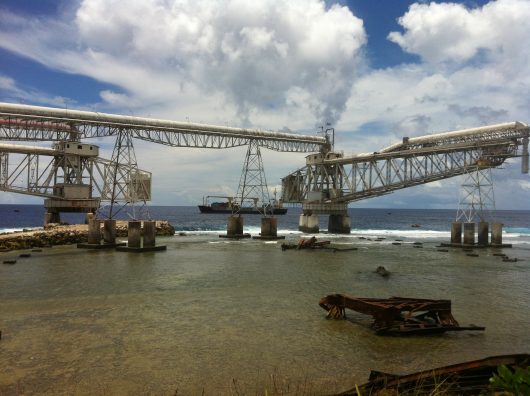 Infrastructure in Nauru is insufficient based on its citizen’s necessities. Isolated in the Pacific Ocean, Nauruans suffer water shortages and energy uncertainty, as power is supplied by diesel generators. New projects aim to reverse this situation, but antiquated facilities still remain.

The Island Ring is Nauru’s main road system. It circles the entire country, shaping the island’s form with 17 concrete kilometers. This is the principal ground transportation infrastructure in the world’s smallest republic.

Nauru has one international airport, built-in 1943 during the Japanese occupation in World War II. It operates with Naura Airlines, which has two air crafts and one all-cargo airplane. The airline flies to various Central and South Pacific islands.

Phosphate mine exploitation is the biggest economic activity on the island. In order to transport the mineral, a four kilometer railway was built in 1907. The train stopped operating in 2011, when the phosphate industry declined dramatically in Nauru. The government estimates that its phosphate deposits have a remaining life of about 30 years, according to BBC.

The energy infrastructure in Nauru is also not reliable. It has a limited capacity due to the nation’s reliance on diesel generators. However, the Asian Development Bank and the European Union have implemented the Nauru Electricity Supply Security and Sustainability Project which includes a new medium-speed 2.6-3.o megawatt diesel generator.

The Australian government also supports the island. With the Nauru Infrastructure and Essential Services Initiative, Australia has provided around $8.3 million in order to improve Nauru’s infrastructure. Thanks to this initiative, Nauru received the installation of a second power generator, and the Hospital Redevelopment Project was completed in February 2017.

Refugees who seek to get into Australia by boat are sent to Nauru’s asylum camp, an offshore retention settlement. Several news articles report that the situation in the camp is difficult since water supply is short and refugees do not have access to basic needs. The island does not have a reliable source of water, as it is surrounded by the Pacific Ocean and has no rivers or lakes.

The only current solutions to the lack of water are desalination plants, which are expensive, and rainwater storage systems. Even though four small plants operate on the island, the desalination process is insufficient and negatively affects Nauru’s environment. To resolve this problem, Nauru’s government, assisted by external investment, planned the installation of a solar PV system and a new desalination plant. This project is expected to produce up to 100 cubic meters of safe water per day.

Infrastructure in Nauru may be obsolete in certain sectors, but the government is working to improve it. Energy and water infrastructure is getting better thanks to the investment of international organizations. The next years will be crucial for the island as the first results from improvement projects begin to appear.