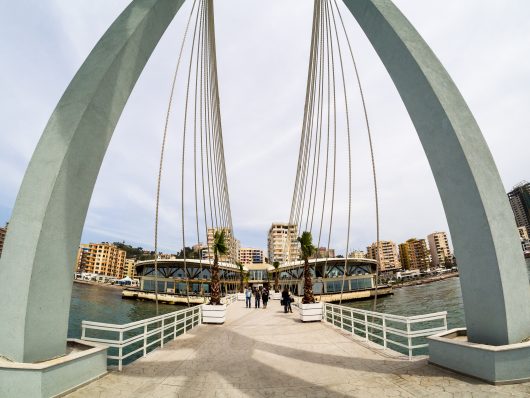 In 2008, Albania managed to develop its economy, rising from its position as the poorest European nation to middle-income economic status. This growth was possible because of international aid to develop infrastructure in Albania, and as a result, poverty decreased by half. Infrastructure projects have increased the prosperity of Albanian society.

Roads in Albania are one of the country’s largest projects, concentrated on the highway Corridor Durrës – Kukës – Morinë, known as the “The Nation’s Road.” This road connects key sections of the nation, linking the capital and the port of Durres to the state of Kosovo. Another project underway is Corridor VIII, which will connect the Albania port of Durres with Bulgaria, joining Tirana, Thana Neck, Skopje, Deve Bair, Sofia, Plovdiv and Burgas. This will fuel trade, being the main east-west transportation route between the Mediterranean and Balkan countries.

Another key part of infrastructure in Albania is electricity and the development potential within this sector. Albania’s potential capacity to generate power from hydro (water) resources, wind, solar and biomass is immense. In 2011, 98.57 percent of the total energy produced was from hydroelectric plants. Investments in energy production help the development of Albania and reduce poverty by allowing more individuals access to affordable, reliable energy.

Providing clean and sanitary water to people is another crucial service in running a functional state. The water supply is at the forefront of providing for citizens and a measurement of an effective government. Albania increased its investments in order to enhance the water supply sector. The government passed a budget increase to boost tourism projects and supply water to areas facing difficulties. In 2010, $10 billion went to water supply improvements, with $6 billion coming from the state budget and the remainder from foreign aid.

Entities such as the municipality of Tirana and the European Bank for Reconstruction and Development (EBRD) are working together to upgrade the municipal infrastructure in Albania. Their plan is to make the capital more environmentally conscious and promote sustainable growth and development. The municipality of Tirana and the EBRD are working through a memorandum of understanding for the development of urban transport, roads, water and wastewater services, solid waste management, street lights and improving energy efficiency.

Albania shows the great benefits of international aid: poverty reduction, roads being built, developing cities and providing for the people of the state. However, improvement growth models need to represent sustainability, investment-strong and export-led ideals.

Focusing on macroeconomic and government fiscal sustainability fuels reform and development for Albania. This, in turn, will benefit all sectors within infrastructure in Albania. Foreign aid in the form of investments will allow Albania to continue to decrease its poverty rate and boost the economy enough to further state development.