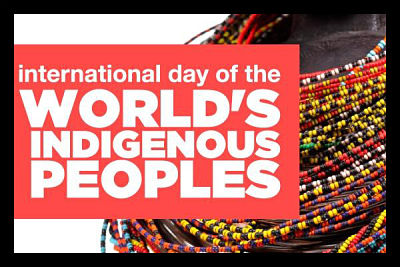 On August 9th, the world celebrated the UN’s International Day of the World’s Indigenous People, an annual event that has been held since 1995. This year’s theme, “honoring treaties, agreements and other constructive arrangements,” struck a chord with aboriginal peoples around the globe. With many suffering from poverty and marginalization at the hands of states in power, the indigenous peoples of today are finding a dead end at the intersection of state interests and modern culture. The United Nations adopted the Declaration on the Rights of Indigenous Peoples in 2007 and has been advocating for indigenous peoples’ rights ever since. In a report released in 2009, the UN Department of Economic and Social Affairs described the state of the world’s indigenous peoples, particularly the impoverishment that most have found themselves in.  The report points out that globalization has given governments a reason to take indigenous lands for use in profitable industries like mineral extraction. Either seized or heavily polluted, these lands and territories of indigenous people have increasingly become their heaviest losses. With unsettling histories marked by colonization, dispossession, and injustice, indigenous peoples have been forced into the lowest echelons of society where they often remain. Research conducted by the International Fund for Agricultural Development (IFAD) has produced statistical figures that characterize the overwhelming poverty felt by these peoples. There are about 370 million indigenous peoples around the globe today, or about 5% of the world population. They make up 15% of the world’s poor and 1/3 of the world’s “extremely poor rural people.” Disparities between countries’ indigenous and nonindigenous populations in education, healthcare, and other basic sectors are substantial. On August 9th, several indigenous populations spoke out against their marginalization.  In the Philippines, the people of Cordillera called on their government to “honor their commitments to [the people of Cordillera].” In the past three years, these people have seen the rise of the state’s mining industry, which has ultimately violated their rights. Given their circumstances, indigenous peoples’ voices are rarely heard. Where foreign aid could be the key to a better world for these peoples, countries continue to allot funds to secure state interests, often leaving aboriginal peoples behind. In a collective effort to shift the tides, indigenous peoples everywhere are calling on donors to consider sending direct donations in support of their development.
– Lina Saud
Sources: Indigenous Day, What Indigenous Peoples Need from Foreign Aid Photo: Indian Country

Working for a Cause: How to Start a FoundationMcDonald’s as a Poverty Indicator?
Scroll to top