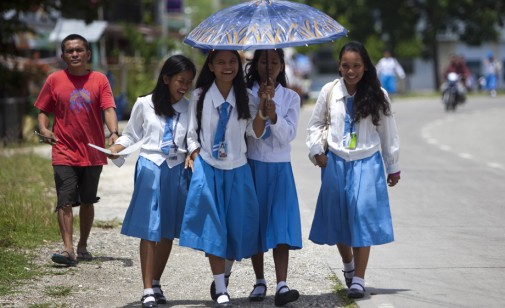 Policies that support quality education and provide social protection are investments that can help stem rising income inequality in the Asia Pacific, according to Axel Van Trotsenburg, the World Bank Vice President for East Asia and the Pacific who spoke recently at a meeting of the Asia Pacific Economic Cooperation (APEC) finance ministers in Cebu, Phillippines during a session called “Global Economic and Financial Outlook, Growing Inequality and Regional Connectivity.”

For poverty-stricken households, labor is often the sole asset they depend on. However, Van Trotsenburg said that if labor were to be made more productive through quality education and the addition of skills training, inclusive growth could begin to happen.

Van Trotsenburg suggested focusing education policies on quality teaching and better learning outcomes. The goal would be to reach youth in their primary and secondary school years.

Education initiatives alone could produce significant improvements for the livelihoods of the poor and reduce income inequality. But additional social protection measures can greatly support and enhance these efforts, significantly improving people’s lives, he said.

For example, conditional cash transfer (CCT) programs can raise school attendance, preventive health care and nutrition among the poor and vulnerable. CCT programs have been successful in places like the Philippines, Mexico, Peru and Chile.

In 2010, The Economist magazine praised CCT programs for their effectiveness. “The programs have spread because they work. They cut poverty. They improve income distribution. And they do so cheaply.”

Despite growth in middle-income East Asian households, poverty and class divide are still very present throughout the region. Van Trotsenburg describes the complexities of the situation:

“In middle-income East Asia, rapid, inclusive growth enabled hundreds of millions to lift themselves out of poverty. Yet, there are still challenges. The bottom 40 percent of the region’s population – almost 800 million people – still live on less than $3 a day in terms of purchasing power parity. These people might fall right back into poverty if the global economy takes a turn for the worse, or if they face health, food-price and other shocks.”

He urged APEC members to continue or accelerate economic reforms to sustain growth that will increase the living standard of those at the bottom of the income distribution.

In particular, he advocated for physical infrastructure investments. “In this region, 142 million households still have no access to electricity while 600 million people lack access to adequate sanitation,” he said. “It will be very important for greater investment to be accompanied by increases in efficiency of such expenditure. And this points in turn to the importance of strengthening institutions, including through public financial management reforms.”