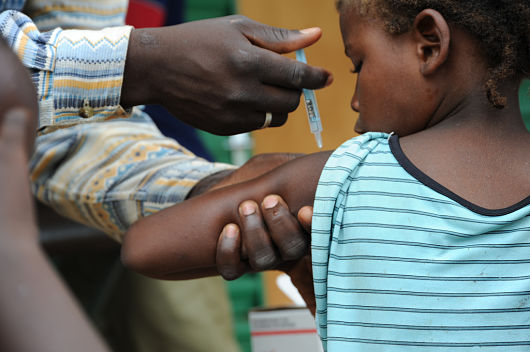 Back in 1974, the World Health Organization (WHO) began the Extended Program on Immunization (EPI). The plan was to set up the managerial and technical functions needed to vaccinate children from diphtheria, measles, tuberculosis, poliomyelitis, tetanus and whooping cough. The end goal was to get children the vaccines they needed on schedule through health visits.

At the time, coverage levels for vaccines was at five percent, but by 1991, the 80 percent benchmark target was met, saving millions of lives. Recently, the WHO has recommended vaccines against type B of haemophilus influenza, hepatitis B, streptococcus pneumoniae, rotavirus, rubella and human papillomavirus for girls.

These extra vaccines are necessary, but the effects of them have not yet been realized. Part of the problem is that with more vaccines come more logistical issues. More vaccines mean that more and improved communication between caregivers and health workers is needed. Add to this the fact that health systems are becoming more complicated and there appears a huge logistical problem.

This is where new diagnostic technology comes in to play. Coupled with spread of mobile technology throughout the developing world, detection paired with cloud technology could redefine the way vaccines are administered around the globe. One organization, Diagnostics for All, is doing just this.

Regular measuring of vaccine administration is extremely important in determining the progress in vaccination goals, such as the ones set out by the EPI. However, in the developing world, common modes of measurement such as household surveys lack accuracy in detecting diseases preventable by vaccines. This is because of low participation, the cost of a clinical examination and reporting inflation.

To fix this, Diagnostics for All has developed an easy solution. Using patterned paper technology, they have developed a test that can be used in resource-stricken areas of the world. It is lightweight, less expensive than other forms of diagnostic tests, reliable and easy to use. No trained doctor is required to run the test and minimal training is needed to perform it: “a sample from a finger prick is sufficient to yield results. No syringes are involved and neither clean water nor sample preparation is needed.”

The test can display results in minutes and has the possibility to interface to Smartphone technology. This idea has the potential to fix the logistical problems that have developed since the WHO began recommending more vaccinations in 2014. By administering a test that can be cheaply done on a broad scale it will be possible to see who needs what and who has already been vaccinated, all from one Smartphone. Will this possibility become a reality? Only time will tell.