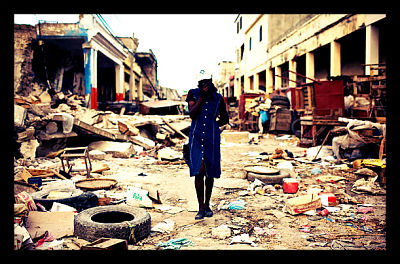 Last June, when reports abounded of the chronic hunger and food insecurity crisis that was ravaging Haiti, the world learned that 1.5 million people were in need of food assistance in the struggling nation, while another 6.7 million people were failing to meet their food needs on a regular basis.

Soon, images of broomstick-thin children with distended stomachs crossed the globe, while international donors and NGOs pledged additional donor dollars to the nation that was devastated by an earthquake in 2010. Despite the international assistance, a staggering 67 percent of the population still has limited access to food, according to the government’s National Coordination of Food Security.

Much of the crisis stems from extreme weather conditions such as floods and droughts which destroyed key crops last year. Worse still, scientists predict that more natural disasters are on their way due to climate change.

Klaus Eberwein, general director of the government’s Economic and Social Assistance Fund believes that the current hunger crisis is due to “decades of bad political decisions,” last year’s storms and drought, and the fact that hunger is not new to Haiti.

The country’s food insecurity issues also have to do with the fact that 80 percent of Haiti’s rice and half of all its food is imported now. With so much depending on imports, meals are becoming harder to obtain on a minimum wage, which is about $4.54 a day.

To make matters worse, Haiti has lost almost all of its forest as poor Haitians continue to chop down trees to make charcoal. Consequently, the loss of trees does not help to contain heavy rainfall or to yield crop-producing soil.

One of the organizations that continues to help stem the widespread hunger is USAID, which has provided over $38 million for emergency and development food assistance in Haiti. This past month, the organization launched a four-year food security program to improve nutrition and access to locally produced foods for the most vulnerable households in Haiti. The project, the Kore Lavi Program, is part of the U.S. government’s global hunger and food security initiatives Feed the Future and Title II.

The program supports the Haitian government in establishing a voucher-based safety-net system to increase poor household’s access to food and prevent malnutrition in children under 2 years of age. It is expected to reach 250,000 households by providing food vouchers, improving maternal and child health and nutrition knowledge, strengthening links between households and health systems, and improving the quality of health and nutrition services. Additionally, it aims to develop a national database system within the Government of Haiti’s Ministry of Social Affairs and Labor to target vulnerable households.

The goal is to change the harsh reality of the statistic that two in three Haitians currently face hunger as the country’s woes continue to mount.