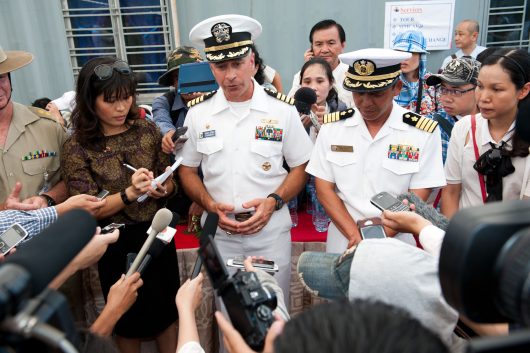 Over the past few weeks, the freedom of the press in Cambodia has suffered significantly. The country normally displays an impressive ability to support unbiased news sources, but the government of Prime Minister Hun Sen has recently directed a crackdown on opposing press organizations.

In anticipation of a threatening 2018 election, the government has shut down 19 radio stations and charged exorbitant taxes to other publications that do not support Hun Sen’s government. The U.S., European Union and the U.N. have all criticized the Cambodian government for its recent actions.

However, Hun Sen is empowered by President Trump’s attacks on free press and the current domestically-focused agenda, which has led to weak engagement with Southeast Asia. In recent years, social media has become a main source of news for Cambodians, and parties challenging the government have been able to use platforms such as Facebook to their advantage.

Social media use in Cambodia has surged dramatically since 2010, with the 2015 growth rate of Facebook users being 30 percent each year. Eight out of 10 of Cambodia’s most popular Facebook pages are political information sources, including news publications and political figures. Cambodians want personal connections with political figures, and thus value the opportunity to engage with candidates on Facebook. Another contributor to high political activity is the heated political climate which makes every issue into a political issue, according to deputy opposition leader Mu Sochua. Sochua believes that Facebook will be a crucial platform to communicate with Cambodians about her party’s values.

Hun Sen’s rival political candidate, Sam Rainsy, has accused Hun Sen of buying Facebook “likes.” The post landed him in prison for defamation, which is yet another example of the government suppressing the freedom of the press in Cambodia. Leaks revealing unflattering information about opposing parties is a common occurrence on political Facebook pages.

During the Arab Spring, social media proved to be a tool that allowed discontented citizens to organize and make their voices heard. In the week before Egyptian President Hosni Mubaraks resigned, tweets about politics increased from 2,300 to 230,000 per day. Videos featuring political protest or commentary went viral, building confidence in the peoples’ ability to organize to force the change they want to see.

The desire for reform regarding freedom of the press must originate from the Cambodian people, and Facebook can be a tool used to amplify their voices. The Cambodians’ extensive involvement in politics on social media is a promising sign for their ability to come together to protect their political freedoms, even when the freedom of the press is being threatened.