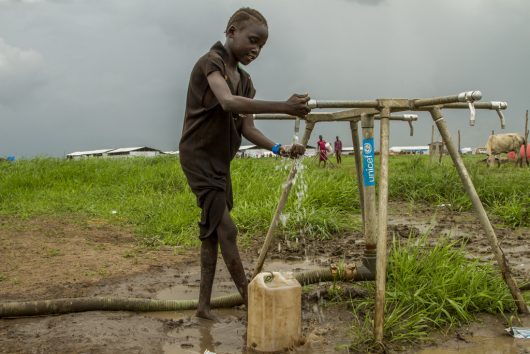 Each year, 289,000 children under the age of five die due to diseases caused by poor water quality and sanitation. This means that one child dies every two minutes and 800 children die per day because they do not have access to clean water or proper sanitation.

On August 29, UNICEF made a statement that declared that access to clean water is a right – not a privilege – and that in countries facing conflict or instability, clean water must be made a priority. The lack of clean water and sanitation is particularly alarming in areas that are in the middle of conflicts; more than 180 million people in crisis-ridden areas do not have access to clean drinking water.

To ensure that children are given their rights to clean water and sanitation, UNICEF has developed an initiative called WASH, which stands for water, sanitation and hygiene. Their goal is to achieve universal access to sanitation, hygiene and safe drinking water by 2030. Through a team that works in more than 100 countries, UNICEF has been able to provide close to 14 million people with clean water and more than 11 million with toilets.

UNICEF is not the only group working to improve access to clean water and sanitation. Pure Water for the World is a nonprofit organization that works closely with underserved communities in Central America and the Caribbean, which gives residents the resources and knowledge to be involved in water projects in their communities. In their 18 years of existence, they have reached more than 750,000 people in Haiti and Central America with solutions to water, sanitation and hygiene problems. Pure Water for the World seeks local and international volunteers and donations to keep the organization running.

Water for Good specifically targets the Central African Republic in its efforts to increase access to clean water and sanitation. They use local businesses for supplies and resources to start sustainable water programs, with over 90 percent of them being functional long after Water for Good has done their part.

Charity: Water is another nonprofit organization that provides clean water to struggling populations. They rely on private donors to fund their operation costs, so all of the money donated to Charity: Water goes directly into funding water projects. The company also follows up each water project with a detailed report of its results and locations, so donors can know exactly where their money has gone.
All of these nonprofits are working toward UNICEF’s ultimate goal – to have worldwide equal access to clean water, sanitation and hygiene for children – which is, as UNICEF states, not a privilege, but a right.