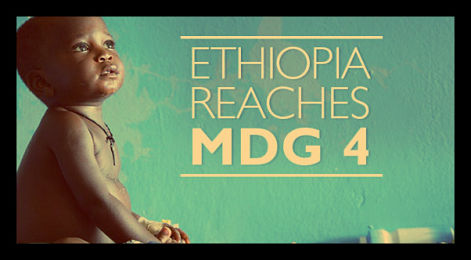 It seems that time and time again, all we hear regarding the Millennium Development Goals (MDGs) is how so many countries may not meet them by 2015. Poverty rates in Country A are actually rising. The illiteracy rate in Country B is unfortunately stagnant. The international community isn’t doing enough to make certain goals achievable.

But for some developing nations, there is a light at the end of the tunnel. For these nations, reaching the MDGs may not be too far away. In some cases, it has already been achieved. The East African nation of Ethiopia is one country that has succeeded.

As a country that used to make headlines for heart-wrenching stories of hunger and famine, Ethiopia is quickly making itself a leader in the development of African nations, and it is only beginning with its commitment to the reduction of the child mortality rate.

According to a recent report funded by UNICEF, the World Health Organization (WHO), and the World Bank, Ethiopia has recently become one of the handful of developing countries to succeed in cutting its mortality rate for children under the age of five years prior to the 2015 cutoff date. The data shows that Ethiopia has reduced child deaths by more than two thirds over the past two decades, taking the rate from 204 children in every 1,000 births that died before reaching the age of five to 68 per 1000 births.

Ethiopia’s progress in this area can be attributed to the government’s commitment to achieving the MDGs as well as its fervent allocation of resources towards healthcare programs. Poverty and fertility rates are down, and the number of children enrolled in school has doubled. The progress is not solely limited to urban areas, but rural and remote parts of the country are seeing a decrease in child mortality rates as well.

Ethiopia’s Minister off Health, Dr. Kesetebirhan Admasu, credits the country’s progress to a mixture of government policies as well as the UNICEF-trained and supported 38,000 community health workers the Government brought in and placed throughout 15,000 health posts all across Ethiopia. Dr. Kesete believes the community health workers have led the way to achieving major reductions in child and maternal mortality. He also alluded to how much of an impact an involved government and community can make on a poor country.

“With commitments of governments and the community, it is really possible to make a difference and to save the lives of millions of children and mothers across Africa,” Kesete said.

Dr. Peter Salama, UNICEF country representative for Ethiopia, agreed, praising the ongoing commitment that the Ethiopian government has had towards the development of the country. Salama added that the government-implemented programs will lead to a more sustainable Ethiopia, seeing as they are government-funded rather than donor-supported.

“The government has set some very bold and extremely ambitious targets. It has then backed them up with real resources and real commitment sustained over the last 10 years,” Salama said.

Ethiopia’s progress is a model for other African nations showing that success in reducing poverty and increasing development is possible. With Ethiopia as a leader, other African governments have come forward and pledged their commitments to increasing child survival in their respective nations, as well as taking control of their countries’ development rather than leaving it to donors.

To this end, Ethiopian leaders have been working on developing country-led roadmaps that incorporate potential policies to end preventable deaths among children under five by 2035, as well as decrease the mortality rate for children under five to under 20 for every 1000 births in all African countries.

Poorest Country in the World: Democratic Republic of Congo Was Karl Marx Correct?
Scroll to top