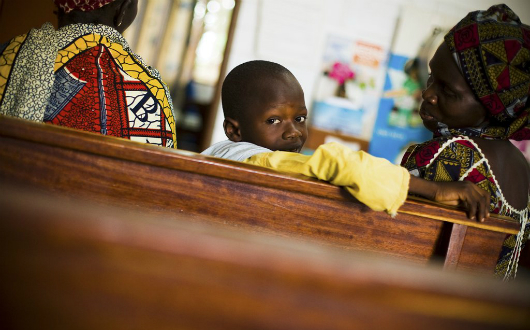 According to the World Health Organization, 9.2 million children under the age of 5 die every year, many from preventable conditions that could be treated with simple healthcare interventions. The majority of these deaths occur in Sub-Saharan Africa and South Asia, where the child mortality rate is 175 per 1000 (compared to 6 per 1000 in industrialized countries).

Many of the diseases that kill children younger than 5-years-old are caused by lack of access to healthcare facilities, improper hygiene and sanitation, unclean water and not enough food, and low levels of education and information. The top three causes of child mortality are:

1. Pneumonia
About 15 percent of child mortality deaths are caused by pneumonia. In 2013, pneumonia killed an estimated 935,000 children under the age of 5. Pneumonia occurs when the air sacs in the lungs, the alveoli, are filled with pus and fluid. This makes breathing difficult, and does not allow the infected person to intake enough oxygen. Those who are malnourished have weaker immune systems and are therefore at a higher risk of dying from pneumonia. Pneumonia is also more likely to affect those who have pre-existing illnesses such as HIV, who live in an area where levels of indoor air pollution are high because of cooking with biomass fuels like wood or dung, who live in crowded homes, or those who have parents who smoke. While pneumonia can be treated with antibiotics, only one third of the children infected with pneumonia get the antibiotics necessary to cure them.

2. Diarrhoeal Disease
Each year, diarrhea kills 760,000 children under the age of 5. It is caused by unclean drinking water, contaminated food or person-to-person contact and poor hygiene. Malnourished children are more susceptible to diarrhea, and children in developing countries are likely to contract at least three cases of diarrhea each year. Since diarrhea leads to malnourishment, those who are already weakened by the disease are likely to contract it again. Diarrhea then leads to severe dehydration, which leads to death. It can be treated with rehydration zinc supplements. A good method of preventing diarrhea is decreasing levels of malnutrition, therefore making children less likely to be infected with the disease.

3. Malaria
In Africa, a child dies every minute from malaria, a disease caused by parasites. These parasites are transmitted to people from mosquito bites. The symptoms are first expressed as fever, chills and vomiting, and can then progress to severe illness and death if not treated within 24 hours. Malaria is preventable through the use of mosquito nets and levels of deaths caused by malaria are decreasing. Malaria related mortality cases in Africa have fallen 54 percent since 2000.

Child mortality is also high in countries that have a high Maternal Mortality Rate (MMR). More than a third of child mortality deaths occur in the first month of life and are related to pre-term birth, birth asphyxia (suffocation), and infections. In order to reduce Child Mortality, Maternal Mortality rates also have to decrease. This can happen with increased access to healthcare facilities and increased prenatal visits.

Child mortality rates are decreasing, but there is still work to be done. Vaccinations, adequate nutrition and increasing education will all help to decrease the levels of child mortality.