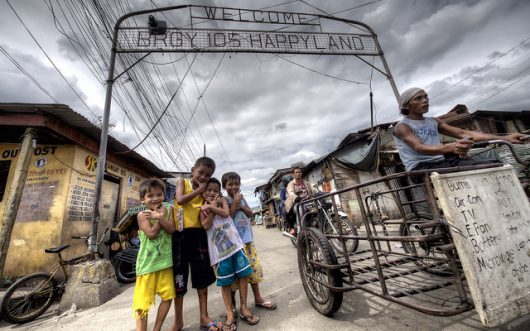 The Philippines is a country located in Southeast Asia comprised of more than 7,000 islands. Poverty has proven to be one of the most significant challenges facing this country and its citizens. Filipinos are having a hard time surviving in such difficult conditions, and more and more are falling into extreme poverty.

According to the Asian Development Bank, the major causes of poverty include: low economic growth, a weak agricultural sector, increased population rates and a high volume of inequality. Because of these factors, there are a lot of effects of poverty in the Philippines that make it difficult for people to live in such circumstances.

With poverty plaguing the country and employment opportunities being scarce, many Filipinos are unable to afford housing, which puts them in danger of turning to the streets for accommodation. In 2012, extreme poverty within the Philippines affected 19.2 percent of the population or around 18.4 million people.

This poverty line survived on $1.25 a day, making it extremely difficult to rise out of poverty and find affordable housing for Filipinos and their families.

Hunger is one of the extreme effects of poverty in the Philippines. With little money to buy food, Filipinos are having to survive on very limited food; even when food supplies are stable, they are most accessible in other areas where people have enough income to purchase the food.

And with such an unequal distribution of income, there is a low demand for food supplies in less developed areas that are home to low-income residents. The quality of food is also decreasing — rice used to be the main source of food for Filipinos, but now it has largely been replaced with instant noodles, which is cheaper but less nutritious. As a result, malnutrition has become a lot more common.

With poverty taking a toll on Filipinos, parents often can’t make enough money to support their families; children then have to be taken out of school to work in harsh conditions. Statistics show that around 3.6 million children, from ages 5-17, are child laborers in the Philippines. This is 15.9 percent of the entire population.

With conditions so troublesome, people often resort to crime and thievery to survive. Research found that one of the overwhelming reasons to steal is due to difficulties caused by poverty. Without proper employment, people turn to stealing, especially since family sizes are rather large, and there are a lot of people to provide for.

There are too many people and not enough resources. And with such conditions, people become desperate and practice drastic measures to provide for themselves and their families.

Even with later statistics found in 2015, 21.6 percent of the population lived below the poverty line. Conditions do not seem to be improving, but there is always the hope for new development. As a result, it is important to understand the effects of poverty in the Philippines because it is a country in need of assistance.