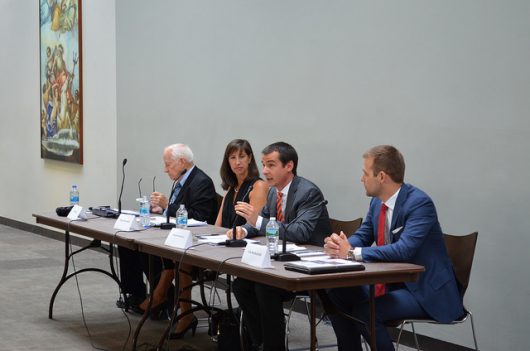 Recently, the Trump administration, in collaboration with congressional leadership on Capitol Hill, has hammered out a deal to prevent a government shutdown while effectively gutting the State Department and agencies like USAID of their funding. This move not only signals a sidelining of diplomacy but marks one of the biggest budget cuts to USAID and the State Department since the early 1990s.

The effects of the budget cuts to USAID are undoubtedly going to hinder diplomatic agencies in eliminating poverty around the globe and increasing diplomatic relations with the countries that depend on us the most. The United States Agency for International Development (USAID) is the State Department’s main tool for dispensing aid to foreign countries and strengthening diplomatic relations.

USAID currently operates in roughly 100 countries, fighting the spread of poverty and disease while working to improve economic conditions worldwide. The proposed budget cuts to USAID weigh in at approximately $9 billion, a staggering defeat to those working toward the end of poverty worldwide.

The President’s proposed budget cuts to USAID amount to nearly one-third of its total budget, in what seems to be a strategic move away from diplomacy and toward military strengthening. Regardless of the President’s agenda, this move away from soft power and diplomacy has been condemned by many members of the military.

A total of 151 retired senior military commanders, including former chiefs of the Navy, Army, Air Force, Marine Corps and Special Operations Command, have warned that a reduction of this magnitude could have detrimental effects around the globe. As threats to the United States’ national security continue to grow, it is a risk to decrease diplomatic ties at such a pivotal moment.

Many civilians and government employees agree with the opinions of their military leaders. Former USAID Administrator Andrew Natsios said, when facing the 1999 budget cuts to foreign aid, that it is likely budget cuts could have detrimental effects toward the technical expertise of USAID and could mark the beginning of a disaster in the long-term.

As well as the statement above, Natsios describes budget cuts toward foreign aid and agencies such as USAID as an “evisceration of the most important tool of American influence in the developing world.” Other staffers from USAID warn of the spread of disease in the United States rising as foreign aid spending is cut. Outbreaks such as the Ebola outbreak may become much larger and harder to contain with a lack of funding to agencies such as USAID. These concerns are still relevant and even more serious today.

Agencies such as USAID are pivotal in diplomatic relations and national security. By providing funds, resources, goods and trade to other countries, the U.S. invests in itself as well as others. By providing healthcare to those in need, USAID prevents the spread of communicable diseases, prevents premature death and builds a market for low-cost medical technologies.

By providing food and farming technologies, the U.S. prevents world hunger and promotes market trading of produce and other consumable goods. By providing foreign aid, the country also helps form more efficiently-run governments and promotes democracy wherever possible. All of these efforts also prevent bigger catastrophes around the globe, such as mass migrations, food shortages and natural disasters.

At the end of March, Congress approved an omnibus appropriations bill for FY18 that will keep the government open through September 30, 2018. When it comes to funding for development and diplomacy, the omnibus overwhelmingly rejects the deep and disproportionate cuts proposed by the Administration in FY18 – highlighting the strong bipartisan support in Congress for these critical programs. Still, there is more work to be done to protect funding for the foreign aid budget in FY19 and beyond.

Email Congress in Support of the International Affairs Budget